Connect
To Top
NewsMay 14, 2013 This post may contain affiliate links

Teens Who Text While Driving Are More Likely to Take Others Risks, Study Finds 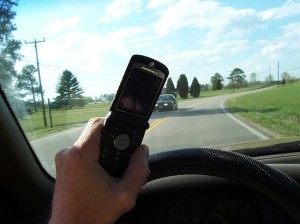 Teenagers who text message while driving also admit to engaging in other risky behavior such as driving under the influence of alcohol, driving with friends who have been drinking, and driving without a seat belt.

Published in the journal Pediatrics on Monday the study’s authors write:

“This suggests there is a subgroup of students who may place themselves, their passengers and others on the road at elevated risk for a crash-related injury or fatality by engaging in multiple risky MV (motor vehicle) behaviors.”

Researchers culled data from a 2011 national Youth Risk Behavior Survey that was conducted by the Centers for Disease Control and Prevention. In the study, researchers asked teens if they had texted while driving in the past 30 days. Almost half of the 8,505 students aged 16 or older who answered the survey admitted to engaging in texting while driving. This type of reckless driving could have resulted in an accident that would have had catastrophic consequences for the young driver and other motorists. They could have found themselves dealing with personal injury lawyers from a law firm similar to Maison Law (https://maisonlaw.com/) or a law firm in their local area, ending with serious legal trouble. This is not the only trouble they could find themselves in with their driving habits.

Researchers found that teens who engage in texting while driving were more likely to forgo seat belts, drive with friends who are drinking, and drink and drive themselves.

According to the study:

Teens who texted while driving for all 30 days were 40% more likely to not always wear a seat belt than students who only texted on one or two days during the survey.

Unfortunately, the study does not differentiate between sending, receiving, or reading texts, which may have perceived differences in levels of risk. The authors also note that the study relies on self-reporting from teens who may under-report or over-report their own text while driving numbers.

In concluding their study, the authors note that parental supervision of teen drivers is still the suggested best solution for preventing dangerous driving behavior.

Teens who text and drive more likely to take other risks: http://thechart.blogs.cnn.com/2013/05/13/teens-who-text-and-drive-more-likely-to-take-other-risks/

Cell Phone Use While Driving: http://commons.wikimedia.org/wiki/File:Cell_phone_use_while_driving.jpg