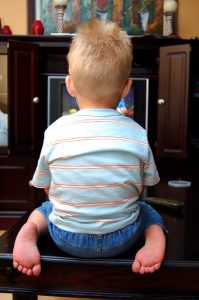 Childhood obesity has doubled in children and quadrupled in adolescents over the past 30 years. Now a new study from researchers at the Geisel School of Medicine at Dartmouth and the Dartmouth-Hitchcock Norris Cotton Cancer Center as published in the journal JAMA Pediatrics suggests that children with televisions in the bedroom are more likely to gain weight compared with children with television-free bedrooms.

Approximately 71 percent of children and adolescents between the ages of 8 and 18 years old have televisions in the bedroom. The researchers in the present study hypothesize that a higher level of television viewing and gaming could have a detrimental impact on the weight of these children.

The researchers therefore conducted a telephone survey of 6,522 boys and girls between the ages of 10 and 14 years old. Questions asked assessed the presence and usage of bedroom televisions. The researchers also collected data on height, weight, and other relevant study measures.

According to the study, having a television in the bedroom was associated with a significantly higher change in body mass index (BMI). Even after taking into account other factors such as total screen time and socioeconomic status, children with a bedroom television were more likely to gain weight over the course of the study.

“We know that childhood obesity can result from a number of contributing factors. Research that identifies simple and concrete actions that parents can take to help reduce the risk of excessive weight gain in their children, such as removing the television from the bedroom, is significant.”

The easiest way to prevent weight gain as a result of bedroom televisions is to remove all televisions from a child’s bedroom.

Concludes study author Diane Gilbert-Diamond, assistant professor of Community and Family Medicine at the Geisel School of Medicine at Dartmouth and a member of the Norris Cotton Cancer Center:

“This study suggests that removing bedroom TVs is an important step in our nation’s fight against child obesity. We found that adolescents with a TV in their bedroom gained about 1 extra pound a year, compared to those without one, even after accounting for hours of TV watched each day and socioeconomic factors. Because bedroom televisions are really common in the U.S. (over half of adolescents have one), this obesity risk factor accounts for over 15 million pounds of excess weight gain per year among U.S. adolescents.”

Additional research is needed to assess the effects of exposure to media through other types of electronic devices such as smartphones and laptop computers on weight gain in children and adolescents.

Association of a Television in the Bedroom with Increased Adiposity Gain in a Nationally Representative Sample of Children and Adolescents: http://archpedi.jamanetwork.com/article.aspx?articleid=1838347
Bedroom TVs Linked to Childhood Obesity, Study Suggests: http://www.medicalnewstoday.com/articles/273454.php
Do Bedroom Televisions Contribute to Youth Obesity?: http://www.newswise.com/articles/do-bedroom-televisions-contribute-to-youth-obesity