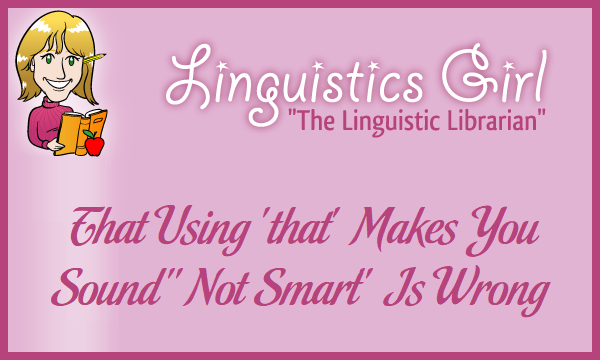 Whenever I come across a post about “words to avoid,” I audibly groan. Such posts are prescriptivist attempts to impose more arbitrary rules on language use. I recently saw a post in my Facebook feed about “words to avoid to sound smarter.” One suggestion was to avoid the word that. The post claimed that that is “superfluous most of the time.” That suggestion fails to distinguish the different forms of that: determiner, pronoun, relativizer, and complementizer.

Furthermore, sometimes relativizer and complementizer that add emphasis even when the that can be replaced by the null form. For example:

There is absolutely nothing wrong with using the overt relativizer or complementizer that in adjective and noun clauses. Avoiding that does not make you sound smarter because the proscription fails to distinguish the different forms of that: determiner, pronoun, relativizer, and complementizer. Removing determiner or pronoun that results in ungrammatical constructions. Replacing determiner or pronoun that changes the meaning of the utterance. If someone tells you to avoid that to sound smarter, know that that blanket statement about avoiding that is wrong.