The Word ‘another’ Is Not an Adjective 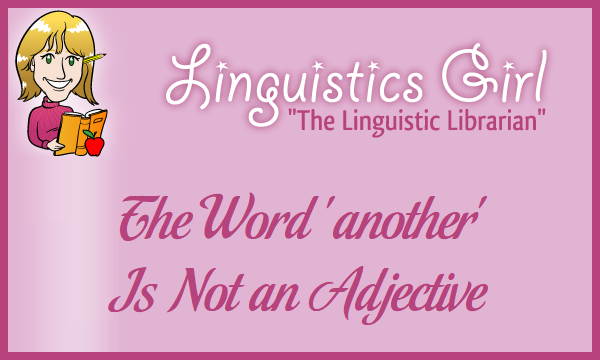 If I had to pick a single grammar topic to focus on for the rest of my life, I would likely choose determiners. I did not learn the term determiner until my junior year as an undergraduate when I took the linguistics class that inspired my subsequent study of all things linguistic. I have often stated that determiners are not adjectives. Recently I encountered a question about commas and the word another. The answer came down to the form and function of another.

What is an adjective? Adjectives modify a nominal form such as a noun, noun phrase, or pronoun. Prototypical adjectives express three degrees of modification: positive, comparative, superlative. The following italicized words are adjectives:

*Note that words such as wooden and mixing are participial adjectives, or adjectives formed from verbs that participate in both adjectival and verbal categories.

Syntactic tests allow us to determine the grammatical form of a word. For example, the word another cannot be a verb because another lack third person singular, simple past, present participle, and past participle forms. The forms *anothers, *anothered, *anothering, and *anotheren are not possible for the word another. The word thus fails the test for verb. The word is also not an adverb because of the lack of comparative and superlative forms: *more another and *most another. Like adjectives, prototypical adverbs can express three degrees of modification. Another is not a preposition because the word cannot take a complement: I went to the store but not *I went another the store. Another is not a conjunction because the word does not link two or more words, phrases, or clauses: I like cats but not dogs and *I like cats another not dogs. 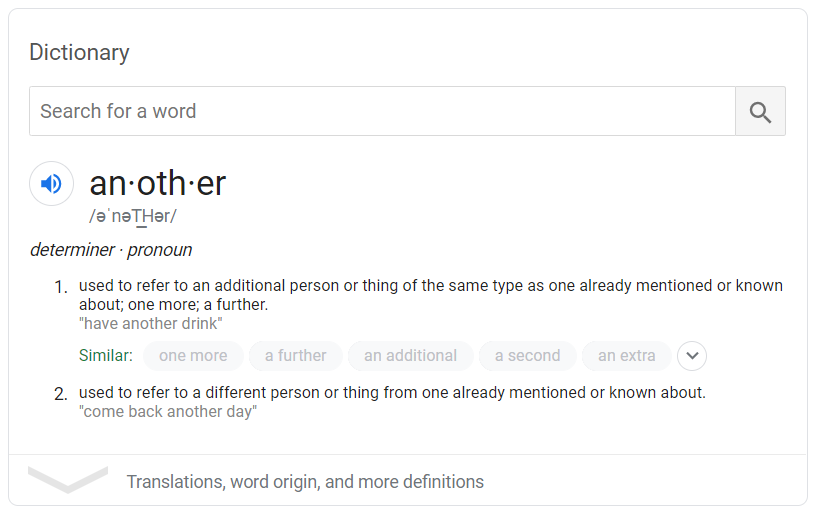 The comma after another in *Gigi wanted another, more fuel-efficient car is furthermore erroneous because of the separation of the determiner from the noun phrase of which the determiner is a constituent. Replacing another with a different determiner illustrates the error:

Punctuation is a convention of writing that helps writers and readers more clearly understand written language. Inserting a comma after the determiner another results in an unclear and ungrammatical construction.

The need of an explicit determiner for the singular common noun car brings us to another problem with the comma in *Gigi wanted another, more fuel-efficient car. The word another can be a determiner. Another can also be a pronoun. A pronoun is a function word that takes the place of another nominal form. If Gigi wanted another more fuel-efficient car, we could say Gigi wanted another. The pronoun another takes a place of the noun phrase another more fuel-efficient car. Pronouns can perform many of the same functions as full noun phrases. Pronoun another can move into a subject position: Another is what Gigi wanted. Pronoun is a subcategory of noun. The syntactic test for noun includes grammatical number and possessive forms. Pronouns share some characteristics of nouns. Pronouns express grammatical number: Another is here but not *Another are here. Another can also show possession: My package arrived today; another’s will arrive tomorrow.