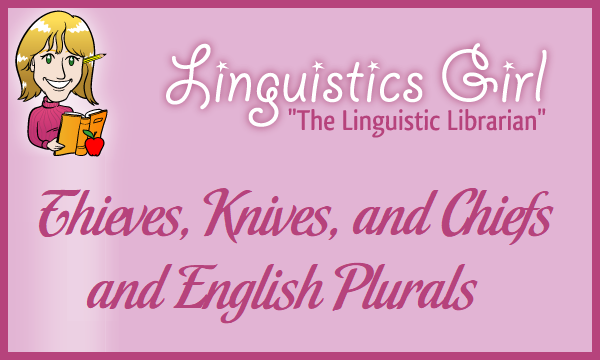 A tweet recently appeared in my Twitter feed in which Merriam-Webster, the dictionary, touted the nonsense that English rejects order. 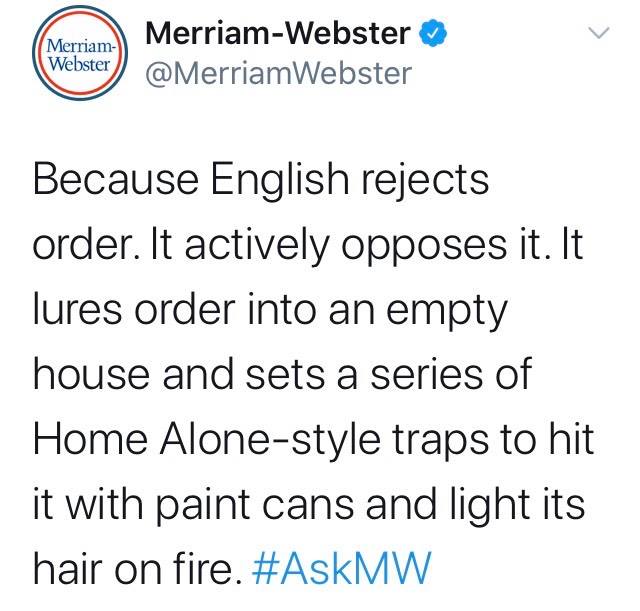 “Because English rejects order. It actively opposes it. It lures order into an empty house and sets a series of Home Alone-style traps to hit it with paint cans and light its hair on fire. #AskMW”

Because English rejects order. It actively opposes it. It lures order into an empty house and sets a series of Home Alone-style traps to hit it with paint cans and light its hair on fire. #AskMW https://t.co/2wYGbG6yyu

The absurd claim came in reply to a question about the plurals of <thief>, <knife>, and <chief>. One thief, two thieves. One knife, two knives. One chief, two chiefs. The noun <chief> affixes the <s> suffix to form the plural, which is a prototypical plural in Modern English. One cat, two cats. One hug, two hugs. One chocolate, two chocolates. The nouns <thief> and <knife> experience a consonant change plus the affixation of the <s> suffix to form the plural. Why? 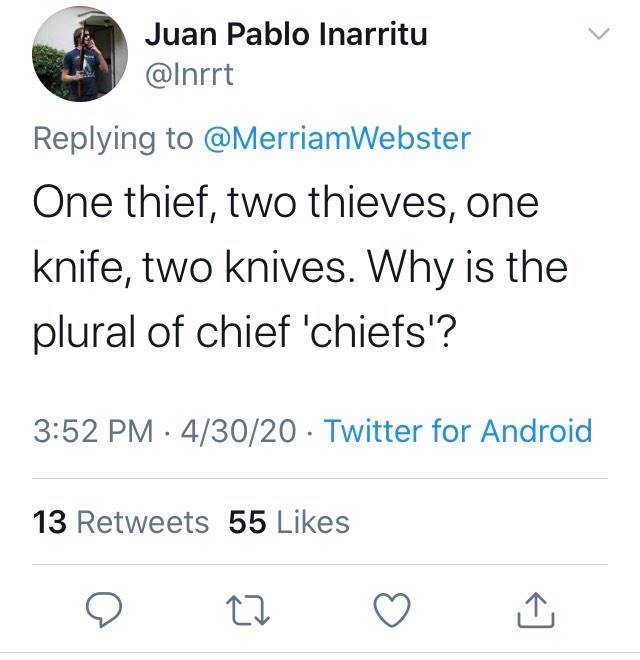 At first glance, the plural forms of <thief>, <knife>, and <chief> might appear disorderly. But the truth is easy to uncover.

Even if you know nothing about the history of the English language, you can easily see that the histories of the three words in question differ. <thief> and <knife> are older, developing from Old English forms. The year 1066, when the Normans invaded English, marks the end of the Old English period (although languages exist on a continuum with no definitive start or end dates between periods). <chief> is younger, arriving in English from Old French around 1300.

<thief> and <knife> are older words. Understanding the plural forms requires delving into Old English phonology. Relevant to <thief> and <knife> is the knowledge of Old English allophones. Allophones are a set of speech sounds that represent a single phoneme. For example, in Modern English, the alveolar flap [ɾ] is an allophone of /t/ and /d/. Both [mɛtəl] and [mɛɾəl] are possible pronunciations of <metal>, and both [mɛdəl] and [mɛɾəl] are possible pronunciations of <medal>. The [ɾ] is an allophone, which is why <metal> and <medal> can be homophonic. Is [mɛɾəl mɛɾəl] a medal made of metal (<metal medal>) or metal for medals (<medal metal>)?

Nouns that end in <f> that take the <s> suffix in the plural often came into English later. Regularization, which refers to the language change in which irregular forms are replaced by regular forms, can also occur. For example, <eage> meant “eye” in Old English. The plural form was <eagan>. Old English <eage> developed into Middle English <eie> whose plural form was <eien>. Over time, regularization occurred, and the Modern English plural of <eye> is <eyes> rather than <*eyen>. Regularization, however, has not affected the plural of <ox>: <oxa~oxan> -> <oxe~oxen> -> <ox~oxen>.

Always remember that English is rule-based. If you think a form is a disorderly, irregular exception, you have not investigated the word enough yet.