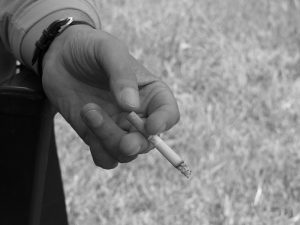 Thirdhand smoke refers to the residual nicotine and other chemicals remaining on indoor surfaces as a result of tobacco smoke. Although previous research has focused on the health risks of smoking and secondhand smoke, a new study published in the journal PLOS ONE suggests that thirdhand smoke is linked to several adverse health effects including liver, lung, and skin problems.

Researchers from the University of California-Riverside (UCR) investigated the effects of thirdhand smoke on liver, lung, and skin healing as well as on behavior. Using a rodent model, the researchers exposed mice to thirdhand smoke in conditions that mimic human exposure.

The exposed mice exhibited alterations in multiple organ systems and excreted levels of NNAL (a tobacco-specific carcinogen biomarker) similar to the levels in children exposed to secondhand smoke.

The researchers also observed increased lipid levels and non-alcoholic fatty liver disease in the liver, excess collagen production and high levels of inflammatory cytokines in the lungs, poor healing in the skin, and hyperactivity. The changes in the liver associated with thirdhand smoke increase the risk of cirrhosis, cancer, and cardiovascular disease while the changes in the lungs increase the risk of fibrosis, pulmonary disease, and asthma.

“We studied, on mice, the effects of third-hand smoke on several organ systems under conditions that simulated third-hand smoke exposure of humans. We found significant damage occurs in the liver and lung. Wounds in these mice took longer to heal. Further, these mice displayed hyperactivity.”

“The latter data, combined with emerging associated behavioral problems in children exposed to second and thirdhand smoke suggests that with prolonged exposure, they may be at significant risk for developing more severe neurological disorders.”

Based on the results of the present study, thirdhand smoke is just as dangerous as secondhand smoke and smoking. However, the researchers caution that additional studies are needed to analyze the biological effects of thirdhand smoke exposure:

“There is still much to learn about the specific mechanisms by which cigarette smoke residues harm non-smokers, but that there is such an effect is now clear. Children in environments where smoking is, or has been allowed, are at significant risk for suffering from multiple short-term and longer health problems, many of which may not manifest fully until later in life.”