Connect
To Top
NewsJanuary 23, 2015 This post may contain affiliate links 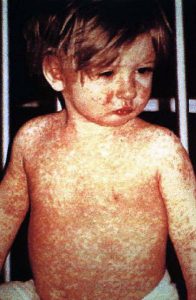 Within a measles outbreak traced to Disney theme parks in California, more than thirty children in Alameda County have been quarantined after possible exposure to another child infected with measles in an Oakland hospital.

The number of measles cases diagnosed within the last month in the United States and Mexico has risen to 75, with 54 cases traced to Disneyland. Two cases had been diagnosed at a Kaiser hospital in Oakland, with one case directly originating from the current Disney outbreak.

Back on January 2, Jennifer Simon and six-month-old daughter Livia Simon went to the hospital for the sniffles and received diagnoses of the common cold. Two days later, the family received a phone call. While the mother and daughter had been at the hospital, a purposefully unvaccinated child with measles also visited the facility. Says Jennifer, “We received a call that evening, saying your daughter may have potentially been exposed to measles.”

As a result of the possible measles exposure, Livia and more than thirty other children have been placed in isolation in their homes for the past three weeks.

Comments Kaiser in a statement:

“We worked closely with the Alameda County Public Health Department and California Department of Public Health to trace and contact … all persons potentially exposed to these cases. We are pleased that no additional cases were identified during the monitoring period.”

Livia, who is too young to receive the combination measles-mumps-rubella (MMR) vaccine, still has one week left in quarantine but has not shown any signs of a measles infection.

Measles is a highly contagious disease caused by the measles virus that is spread through contaminated droplets from the nose, mouth, or throat of an infected individual. Coughing and sneezing are the most common ways in which the measles virus is passed from person to person. Symptoms of the measles occur eight to ten days after exposure and include bloodshot eyes, cough, fever, sensitivity to light, muscle pain, eye redness and irritation, runny nose, sore throat, tiny white spots inside the mouth, and a telltale rash.

Three out of ten people who contract measles will develop one or more complications including pneumonia, encephalitis, ear infections, and diarrhea. One to two of every 1,000 children infected with the virus will die. Measles in pregnant women can cause premature birth and low birth weight.

The only effective means of preventing measles is the MMR vaccine. The Centers for Disease Control and Prevention (CDC) currently recommends all children receive two doses of the MMR vaccine, with the first dose given between 12 and 15 months and the second dose between 4 and 6 years. One of the most effective vaccines currently available, the measles vaccine is up to 99 percent effective in preventing measles infections.

Because two to five percent of individuals do not develop immunity after the first MMR vaccine, the second dose provides an additional opportunity for individuals who did not respond to the first dose to develop measles immunity. Additionally, children over the age of 12 months can receive the second dose as soon as 28 days after the first within an outbreak setting. The MMR vaccine may also be effective when administered within the first 72 hours after exposure to measles.

National Institute of Allergy and Infectious Diseases director Dr. Anthony Fauci explains the importance of the measles vaccine in light of the recent anti-vaccination movement:

“First of all, the measles vaccine is one of the most highly effective vaccines that we have against any virus or any microbe. And it is safe, number one. Number two: Measles is one of the top two most contagious infectious viruses that we know of, so you have a highly infectious virus and you have an extraordinarily effective vaccine. And the idea of not vaccinating your children and putting them at risk for what can be a serious disease — measles is not an insignificant disease, and there can be some serious complications. So it really is a shame that children are not allowed to get vaccinated by their parents.”

Health officials believe that the current measles outbreak originated when a measles-stricken visitor to one of the Disney parks who brought the virus from abroad last month. Twenty-one additional measles cases are not linked to the Disney outbreak. Although measles was essentially eradicated from the United States fifteen years ago, 644 cases occurred in 2014, largely due to falling vaccination rates.