Connect
To Top
InformationJanuary 17, 2020 This post may contain affiliate links

<*tion> Is Not an English Suffix 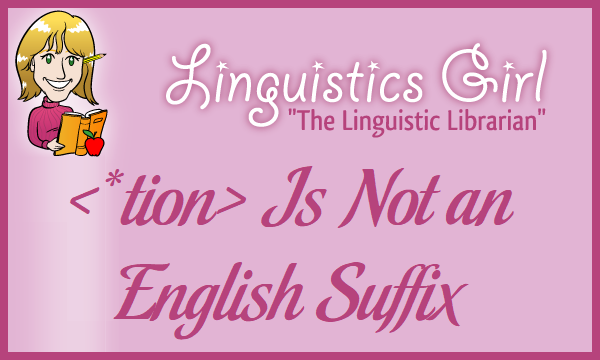 I previously wrote a post entitled The -ion Suffix, Connecting Vowel <i>, and Phonological Markers in which I explain the reason that only <ion> is a suffix. To avoid repeating myself again, I suggest reading my original post first before continuing here.

I am writing on the topic of the <ion> suffix again in response to a blog post and series of tweets from a Greg Ashman (@greg_ashman). According to his Twitter bio at the time of this writing, he is a teacher and PhD candidate. He wrote a blog post entitled “The sophisticated world of Structured Word Inquiry” and linked to one of my tweets in which I state “<*tion> is not a suffix.”:

Language is not a code.

Determiners are not adjectives.

Plural means "not one."

Not all words that describe nouns are adjectives.

English does not have a future tense. 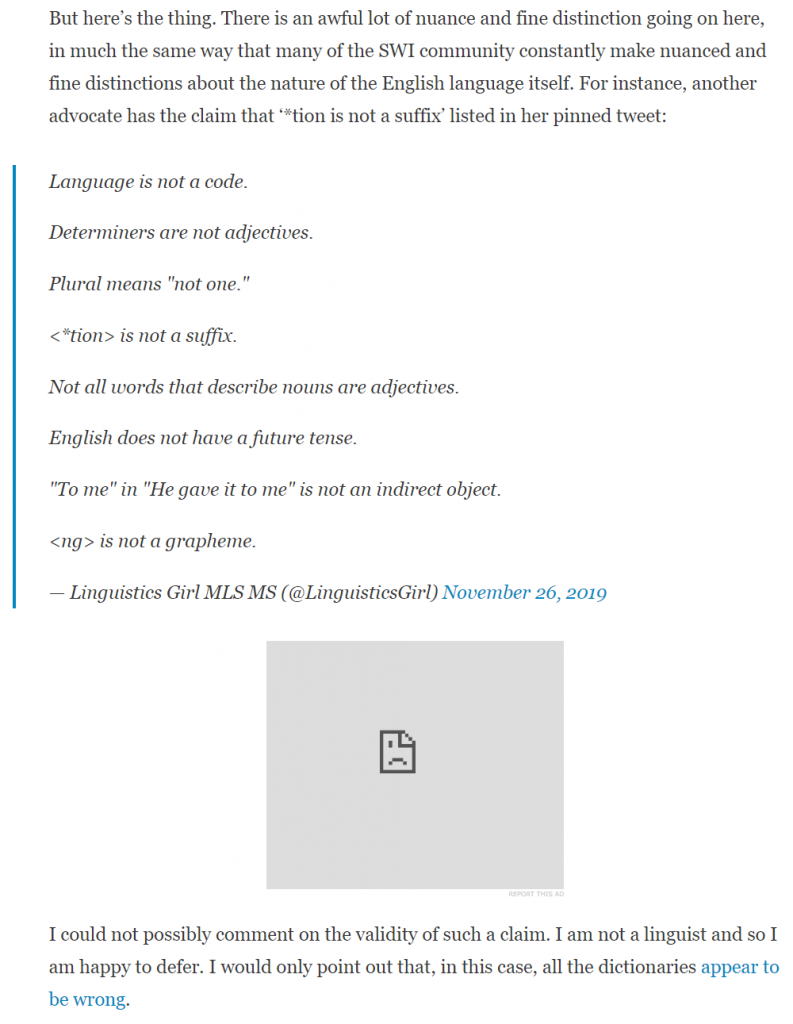 The <ion> suffix of Modern English, which is a common suffix forming abstract nouns from verbs, comes from French <ion> and directly from Latin <ionem> (nominative <io>, genitive <ionis>). Another definition of <ion> is a suffix that forms a noun of verbal action.

Now, had you asked me a little over a year ago, I would have agreed that <*tion> was a suffix because I had been taught <*tion> is a suffix. I was grossly mistaught as many of us were. I published a post just the other day in which I show another way in which my phonics miseducation phailed me. I will never claim to always be right. I make mistakes. I am still unlearning the lies that I learned as a young reading and spelling student. But I now know how to look for evidence to support claims about the English spelling system. I therefore put out a challenge to show me a word in which <*tion> is a suffix and the <t> does not belong to the base.

Show me a word in which -*tion is a suffix and the <t> does not belong to the base.

I later amended my statement to “Show me a word in which -*tion is a suffix and the <t> does not belong to the base or another suffix.” Because my initial statement was incomplete. Because I make mistakes. And I am not afraid to admit my mistakes. In any case, all the examples offered to me included <ion> suffixed onto a base that ended with a <to> or were <ation> which is two suffixes: <ate + ion>.

The first list of words offered to me from a Michael Salter (@mikesalter74) ended with the question “Want more?” Ashman offered <absolve> and <absolution>. Despite the efforts of both tweeter, I showed that each word contained <ion>.

<revolve> and <revolution> both come from Latin <revolvere>, which is a complex word consisting of the prefix <re> “back, again” and the verb <volvere> “to roll.” Twin bases derive from the 2nd and 4th principal parts of a Latin verb. The 2nd part of <volvere> is <volvere> and the 4th part <volutus>. Twin bases therefore come from Latin <volvere>. <volve> is the base of <revolve> and <volute> of <revolution>. The following are word sums that provide evidence of both <volve> and <volute>.

The very first word study that my oldest and I attempted over a year ago was on <solve> and <solute>. I published a <solve> word matrix already. I need to finish up the <solute> post.

<cite> comes from Latin <citare>. <citation> is the base <cite> plus the suffixes <ate> and <ion>. The following are word sums that provide evidence of <cite>.

<organise> and <organisation> are the British spellings of the American <organize> and <organization>. Both come from Latin <organum> “instrument, organ.” The base is <organ(e)>, literally “that with which one works.”

See Solve~Solution above. <solve> and <solute> from Latin <solvere> are the bases of <absolve> and <absolution>.

So far, not a <*tion> suffix in sight. Every instance of a word containing an <ion> is an example of the <ion> suffix. Some also include the <ate> suffix, which forms the complex <ation> suffix construction.

Some other tweeters then chimed in with some suggestions, all of which contain <ion> or <ate + ion>.

<corona> comes from Latin <corona> “a crown, a garland.” The base is <corone>.

<division> and <divide> come from Latin <dividere> “to separate”, which is a complex word consisting of the prefix <di> “apart” and the verb <videre> “to “seem, appear, be seen see, look at.” The 2nd part of <videre> is <videre> and the 4th part <visus>. Twin bases therefore come from Latin <videre>. <vide> is the base of <divide> and <vise> of <division>. The following are word sums that provide evidence of both <vide> and <vise>.

Still, not a <*tion> suffix in sight. Every example offered to me contains an <ion> or <ate + ion>.

Salter then told me to try googling “allomorph.” For those not familiar with the term, an allomorph is a variant form of a morpheme. In other words, an allomorph is a morpheme that varies in sound without changing the meaning. The third person singular simple present <s> and <es> suffixes, the plural <s> and <es> suffixes, and the simple present/past participle <ed> suffix in English are examples of allomorphs. But <*tion> is not an allomorph of the <ion> suffix. Every single example of a <t> followed by an <ion> is an example of the <t(e)> on the end of word or in the suffix <ate>. Here is another list of word sums that provide evidence of <ion>:

An elegant analysis supported by the evidence is that English has an <ion> suffix and an <ate> suffix. The evidence is in the spelling system.