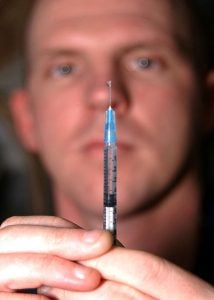 Researchers in the United States and Canada are recommending that all US preschoolers receive the flu shot. According to newly published research, the influenza vaccine has been shown to cut ER visits by one-third in the younger age group.

The study was conducted using real-time data from hospitals in Boston and Montreal to determine if the US suggestion to recommend flu vaccinations for the 2- to 4-year-old age group in 2006 has made a positive effect on emergency room visits.

The study also revealed that older children also saw a decline in ER visits of nearly 18 percent in Boston when compared to Montreal.

With nearly 115 US children and teens dying of the flu virus in the United States last year, the study hopes to educate parents about the importance of the influenza vaccine.

The Centers for Disease Control and Prevention is now recommending that children six months of age and older receive a flu shot.