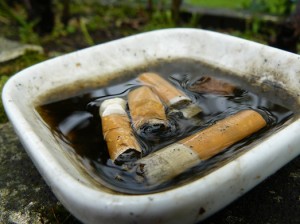 Despite the previous outcry from smokers around the country, total smoking bans help smokers cut back or quit smoking completely, says a new study from researchers at the University of California-San Diego (UCSD) School of Medicine as published in the journal Preventive Medicine.

According to the most recent statistics from the Centers from Disease Control and Prevention (CDD), approximately 440,000 deaths occur annually in the United States from smoking-related causes including secondhand smoke. Diseases caused by smoking include cancer and respiratory and vascular diseases. Smoking also increases the risks for infertility, preterm delivery, stillbirth, and low birth weights. The life expectancy of a smoker is at least 10 years shorter than for a nonsmoker. Exposure to secondhand smoke also causes 49,400 deaths annually.

Smoking-related diseases as a result of smoking are 100 percent preventable by not smoking. Fortunately, quitting smoking before the age of smoking reduces the risk of death from smoking-related causes by about 90 percent. Some places that don’t enforce a smoking ban help people to cut down and quit smoking by getting them to use alternative nicotine methods such as things like Siberian snus, which takes away the smoking element of nicotine addiction. However, this is about the effect of smoking bans on public health.

Beginning in 1994, states throughout the United States started enacting public smoking bans. California was the first state to ban public smoking in certain places. Many other states and cities followed with bans on public smoking. Many management companies have also enacted smoking bans for private buildings and residences.

For the present study, researchers sought to determine the effects of smoking bans on the smoking habits of smokers, specifically whether bans encouraged and helped smokers to cut back or quit.

After surveying 1,718 smokers in California who were representative of the adult population, the researchers led by Dr. Wael K. Al-Delaimy discovered that total smoking bans including within private residences significantly increased the chances of smokers cutting back or quitting. Partial smoking bans, both within just a home and just a city, were not as effective in helping smokers quit.

Dr. Al-Delaimy summarizes the findings, “When there’s a total smoking ban in the home, we found that smokers are more likely to reduce tobacco consumption and attempt to quit than when they’re allowed to smoke in some parts of the house.”

The results of this study highlight the importance of smoking bans for public health. In addition to helping smokers quit, public smoking bans have also changed the “social norm” in regards to smoking. Smoking is seen as less acceptable in the face of bans.

As Dr. Al-Delaimy concludes, “These results provide quantitative evidence that smoking bans that are mainly for the protection of nonsmokers from risks of second-hand smoke actually encourage quitting behaviors among smokers in California.”

In other words, total smoking bans benefit both nonsmokers and smokers, creating, as Dr. Al-Delaimy says, a “win-win outcome.”