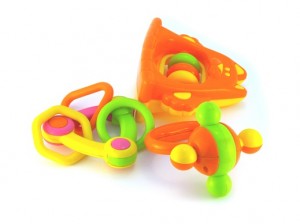 Two common bacteria that cause many infections in children and the elderly can live outside the human body on objects such as toys, books, and cribs for longer periods of time than previously thought, says a new study from researchers at the University at Buffalo in New York.

Previous studies suggested that bacteria die quickly after leaving the human body. However, the researchers in the present study discovered that Streptococcus pneumoniae and Streptococcus pyogenes linger significantly longer on many surfaces.

Streptococcus pneumoniae is a leading cause of otitis media (ear infections) and can cause pneumonia as well as other invasive pneumococcal diseases such as acute sinusitis, conjunctivitis, meningitis, bacteremia, sepsis, osteomyelitis, septic arthritis, endocarditis, peritonitis, pericarditis, cellulitis, and brain abscess. Streptococcus pyogenes causes group A streptococcal infections such as strep throat and skin infections. Group A streptococcal infections result in more than 700 million infections worldwide each year and over 650,000 cases of severe, invasive infections with a 25 percent mortality rate.

In investigating the longevity of bacteria on surfaces outside the human body, the researchers tested surfaces in a day care center. Four out of five stuffed toys tested positive for Streptococcus pneumoniae. Even after being cleaned, some surfaces such as cribs harbored Streptococcus pyogenes bacteria. The testing had been done in the morning hours before the day care center opened, meaning that the cleaned surfaces had not had human contact for hours. Some bacteria still thrived on the surfaces.

Senior author Anders Hakansson, PhD, assistant professor of microbiology and immunology in the UB School of Medicine and Biomedical Sciences, explains the importance of these findings:

“These findings should make us more cautious about bacteria in the environment since they change our ideas about how these particular bacteria are spread. This is the first paper to directly investigate that these bacteria can survive well on various surfaces, including hands, and potentially spread between individuals.”

Dr. Hakansson and his fellow researchers had become interested in the possibility that some bacteria might survive on certain surfaces after publishing work last year that showed that some bacteria form biofilms when colonizing human tissues. The sophisticated, highly structured biofilm communities are hardier than other forms of bacteria, meaning the bacteria could potentially live longer outside the human body.

As Dr. Hakansson explains, “Bacterial colonization doesn’t, by itself, cause infection but it’s a necessary first step if an infection is going to become established in a human host. Children, the elderly and others with compromised immune systems are especially vulnerable to these infections.”

Previous studies used bacteria grown in laboratory media, called broth-grown planktonic bacteria, which did not develop the biofilms and thus died quickly. Some bacteria grown within the human body does form the biofilm, resulting in hardier bacteria that does not die as quickly on surfaces outside of humans.

“In all of these cases, we found that these pathogens can survive for long periods outside a human host.

“Commonly handled objects that are contaminated with these biofilm bacteria could act as reservoirs of bacteria for hours, weeks or months, spreading potential infections to individuals who come in contact with them.

“If it turns out that this type of spread is substantial, then the same protocols that are now used for preventing the spread of other bacteria, such as intestinal bacteria and viruses, which do persist on surfaces, will need to be implemented especially for people working with children and in health-care settings.”

These findings indicate a need for better strategies to prevent infections in locations such as hospitals, nursing homes, schools, and day care centers.