The Transportation Security Administration (TSA) found themselves apologizing to a breastfeeding mom this week after the agency humiliated her as she tried to express breast milk using a breast pump before boarding a flight. 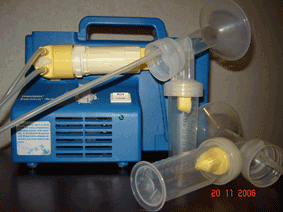 The TSA did not like that the mother of four was attempting to board an airplane with empty bottles and asked her to express her milk before boarding the plane. Officials then ordered Amy Strand to stand over a public restroom sink and use her breast pump in full view of other travelers.

“He said I couldn’t go through because there was no milk in the bottles… But I was not going to leave a part of the breast pump behind- it cost over $200. He told me… my option was to leave it behind or to put milk into it.”

“There was a TSA agent in there using the restroom and I asked her if there was a private place to pump, and she said no… I had to stand at the sink in my heels and dress pumping as travelers came and went. I was humiliated and fighting back tears. It confuses me why an ice pack and breast pump were a threat to national security.”

Unlike many of their past mistakes, the TSA was quick to apologize this time around in a written statement spokeswoman Lorie Dankers wrote:

“Our officer mistakenly told her that she could only bring the (pump) pack if it was medically necessary, (and) she informed him that she planned to use it later for the storage of breast milk. The passenger was escorted from the checkpoint and later returned with previously empty containers filled with breast milk. She was screened and allowed to proceed with all of her carry-on items. The passenger has contacted us with her concerns and we accept responsibility for the apparent misunderstanding and any inconvenience or embarrassment this incident may have caused her.”

Do you think the TSA offered a good enough apology for its employees actions?