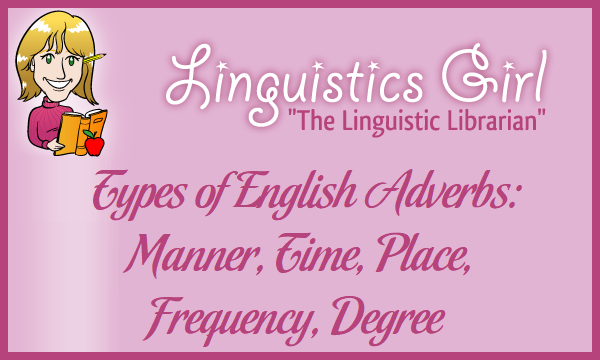 An adverb is a “word that describes a verb, adjective, other adverb, or clause.” An adverb phrase consists of an adverb plus any modifiers. Many grammars use the category of adverb as a “catch-all” category to classify words with various different types of syntactic behavior that otherwise have little in common except for not fitting into other available categories in a language. English has five general categories of adverbs: manner, time, place, frequency, and degree.

The following sections define and exemplify the five types of adverbs in the English language.

The first type of adverb in the English language is the adverb of manner. Adverbs of manner answer the question “how” by providing more information about how something happens. Some common adverbs of manner include the following:

The second type of adverb in the English language is the adverb of time. Adverbs of time answer the question “when” by providing more information about when something takes place. Some common adverbs of time include the following:

Note that some grammars analyze words such as today, tomorrow, and yesterday as adverbs of time. However, all three time words can also be analyzed as nouns performing the grammatical function of adjunct adverbial.

The third type of adverb in the English language is the adverb of place. Adverbs of place answer the question “where” by providing more information about where something takes place. Some common adverbs of place include the following:

Note that many adverbs of place are identical in form to prepositions. If a prepositional complement follows the location word, then a prepositional phrase performs an adverbial function rather than an adverb. The p-word functioning as a particle in many phrasal verbs also resembles an adverb of place.

The fifth type of adverb in the English language is the adverb of degree. Adverbs of degree provide more information about the level or intensity of a verb, adverb, adjective, or other grammatical form. Some common adverbs of degree include the following:

Adverbs in English grammar are defined as “words that describe verbs, adjectives, other adverbs, and clauses.”

Adverb is a grammatical form.