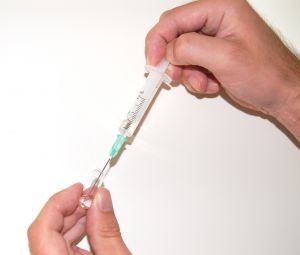 In the face of an influenza epidemic, the Centers for Disease Control and Prevention (CDC) has announced that the current seasonal flu vaccine is only 23 percent effective. Because the current method for producing the influenza vaccine relies on choosing viruses months in advance, viruses sometimes drift, resulting in a less effective vaccine. However, researchers at McMaster University and the Icahn School of Medicine at Mount Sinai in New York recently discovered a new class of antibodies may provide the basis for a new “universal flu vaccine.”

Comments Matthew Miller, senior author of the new study and assistant professor in McMaster’s Department of Biochemistry and Biomedical Sciences at the Michael G. DeGroote School of Medicine, on the benefits of a universal flu shot:

“Unlike seasonal vaccines, which must be given annually, this type of vaccine would only be given once, and would have the ability to protect against all strains of flu, even when the virus mutates. This would prevent the occurrence of flu pandemics and poor vaccine efficiency in the case of mismatches, which actually occurred this year.”

Influenza, or the flu, is a contagious respiratory illness caused by various flu viruses. Symptoms of the flu include fever, chills, cough, sore throat, runny or stuffy nose, muscle or body aches, headaches, and fatigue. Complications of the flu include pneumonia, bronchitis, sinus and ear infections, and death. Influenza is not the same as the stomach flu, which is characterized by nausea, vomiting, and diarrhea. The seasonal flu vaccine protects against the respiratory flu.

The study also indicated that the subtype of antibodies that are present in the lungs and upper respiratory system are particularly potent in neutralizing flu.

Comments Miller, “This is also very encouraging and provides guidance as to what vaccine would be best for delivering a universal flu vaccine – that is, inactivated versus live-attenuated.”

Inactivated vaccines contain dead microbes while attenuated vaccines contain live but weakened microbes. Attenuation allows a microbe like an influenza virus to replicate harmlessly in the upper respiratory tract in order to create an immune response while rendering the virus useless at actually infecting the body.

The results of the study indicate the possibility of a universal flu shot in the near future. Miller and colleagues hope to see the creation of a universal influenza vaccine within the next five to seven years.

Another recent study concluded that seasonal flu vaccines may boost immunity to many types of influenza viruses, not just the specific viruses included in each vaccine.