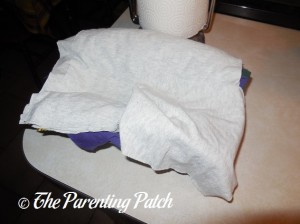 To reduce my use of toxic chemicals in my home, I have switched to white vinegar for my daily cleaning needs in my kitchen. Not only is vinegar safer than conventional cleaning solutions, but using vinegar also helps keep the ants that invade my kitchen every summer at bay. Plus, I can safely keep the spray bottle out on the counter without worrying that my daughter will hurt herself on caustic chemicals.

Recently in my ongoing attempt to get the clutter out of my house, I finally got around to sewing all my old t-shirts from high school and college into a t-shirt quilt. The quilt turned out amazingly. I used some red fabric that I had lying around as the backing and used part of an ugly yellow fleece blanket as the interior. The only new material that I purchased was the edging. My daughter picked out red.

With the quilt finished, I still had a lot of scraps of old t-shirts lying around. I then came up with a brilliant idea to recycle the t-shirt scraps: upcycled cloth napkins. I cut the remaining fabric into napkin-sized squares. (My husband claimed the rest of the t-shirt scraps to use as grease rags out in the garage.) I ended up with a rather sizeable pile of cloth napkins. Now at meals and whenever my daughter is a “very messy girl,” we grab a cloth napkin from the counter. I also use the napkins to clean my kitchen with vinegar. The used napkins then get tossed in a bowl on the counter or directly into the laundry basket in the nursery.

Using cloth napkins has already saved me a lot of money that I would have spent on paper napkins and paper towels. Upcycling my old t-shirts into cloth napkins also helped prevent perfectly good fabric from ending up in a landfill. Plus, washing the cloth napkins is super easy. I just toss the napkins in with the rest of my laundry! Making the switch to upcycled cloth napkins has helped me both go greener in my home and save money. 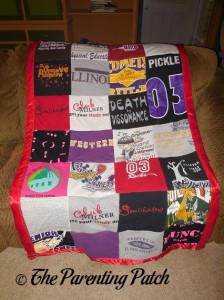 Do you use cloth napkins? Have you considered making the switch?