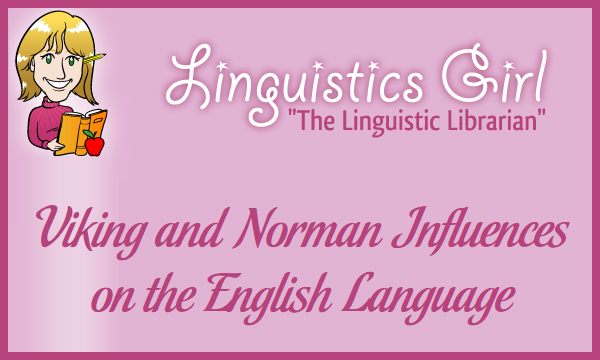 During the eighth and ninth centuries, Vikings from Scandinavia from the North attacked the Germanic tribes living in England (Smith “External”). Around the same time period, Danish Vikings assailed and conquered the northern area of France, which became the dukedom of Normandy (Baugh and Cable 92). Only two hundred and fifty years later in September 1066, the Norman French led by William the Conqueror invaded England from the South and won the Battle of Hastings (Baugh and Cable 108-111). Both Old Norse and Norman French contributed linguistically to the English language. Whereas the changes attributed to the Viking language are often viewed positively by otherwise delightful English language historians, linguistic affects credited to the Norman French language are considered negative to the Germanic nature of English. Regardless of the value judgments of foreign influences on English, both Old Norse and Norman French significantly attributed to the phonetics and vocabulary of the language.

The third person plural pronouns they, them, and there are instead of Scandinavian origin (Jespersen 73). As Baugh and Cable suggest, the rare borrowing of pronouns by English may be the result of confusion in distinguishing the similar singular and plural forms experienced by Viking invaders hearing and speaking Old English (102). Instead of developing into hi from hī just as he developed from hē, the Scandinavian form þei replaced the Old English form and developed into they (Baugh and Cable 162). In addition to gaining the third person plural pronouns from Scandinavia, Old English also borrowed verb forms such as the plural form of the most common verb to be from the Viking language (Baugh and Cable 102). The plural form of to be in Wessex, which was the most powerful kingdom in the Anglo-Saxon Heptarchy during the Viking invasion (Smith “Characteristics”), was syndon (Baugh and Cable 102). Like the Modern English third person plural pronouns, the present plural and second person singular are is also of Scandinavian origin (Baugh and Cable 102). Although borrowing of grammatical words is uncommon, Old Norse contributed both pronouns and verbs forms to Old English. 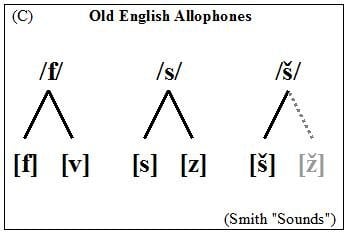 The voiceless allophones [f] and [s] only occurred at the beginning or end of words such as in freond and segst. Correspondingly, the phonetic environment of the voiced allophones [v] and [z] is only between two vowels such as in ofer and cǣsa. Unlike for /f/ and /s/, [š] is the only possible sound for the phoneme /š/ in Old English such as in sceap and scip. When the Normans invaded England in 1066, speakers of Norman French introduced the phonetic sound [ž] to the English language such as in the modern words measure, lingerie, and Kosur. During the Middle English period, phonolozation occurred because of the addition of the voiced [ž] sound. The allophones [f], [v], [s], [z], [š], and recently-acquired [ž] split into the separate phonemes /f/, /v/, /s/, /z/, /š/, and /ž/ in Middle English. Because of the influence of Norman French, English words now begin with both [v] and [z] as well as both [f] and [s]. (Smith “Sounds”)

When the Scandinavians invaded England during the eighth and ninth centuries, the Vikings were not perceived as foreigners by the English but as distant relatives because both the Anglo-Saxons and the Scandinavians were of Germanic origin (Jespersen 62; Baugh and Cable 95). Likewise, although the differentiating effects of Norman French are evident in Modern English just as the distinguishing influence of Low German appears in Modern Danish (Jespersen 67), Old English and Old Norse were incredibly similar languages (Baugh and Cable 97). Many commonplace words were similar or identical in both languages (Jespersen 67). In fact, Jespersen as well as Baugh and Cable argue that a speaker of Old English was probably somewhat mutually intelligible to a speaker of Old Norse (Jespersen 66; Baugh and Cable 96).

Because of the intimate relationship both nationally and linguistically between the two groups, Scandinavian settlers assimilated quite easily with the English residents after the initial violent period of pillaging and plundering of England by the Vikings (Baugh and Cable 95). The Scandinavians adopted an intermingling of Old English with their native Old Norse while the English generously borrowed loan-words from Old Norse into Old English. According to Jespersen, children produced by intermarriages between Scandinavians and Anglo-Saxons learned English as their first language (81). Unlike the subsequent Norman French, the majority of Scandinavians moving to England were lower class farmers and merchants as opposed to upper class rulers and authorities (Jespersen 82; Baugh and Cable 95). Thus, words borrowed into Old English from Old Norse permeated every level of English culture.

Around the same time period as the Viking invasions on England, Danish Vikings attacked the northern area of France and established the dukedom of Normandy (Baugh and Cable 92). Just as the Scandinavians in England merged with the English, the Vikings in France quickly integrated into French culture. However, as Baugh and Cable recount, the Normans were originally Danish Vikings from the North or Northmen but “soon absorbed the most important elements of French civilization” and essentially abandoned their Germanic heritage (109). Even after the Norman Invasion in 1066, the Norman French rulers of England continued close contact with the dukedom of Normandy in France by retaining landholdings in both countries as well as speaking Norman French as opposed to learning English (Baugh and Cable 114;116). Consequently, the English viewed the Norman French as foreign others because, unlike the preceding Scandinavian settlers, the majority of Normans were upper class nobility and royalty who represented a more prestigious culture (Jespersen 82;87). Thus, Old English mainly borrowed words from Norman French for culturally elite aspects of society such as military, government, religion, law, leisure, art, and cuisine (Smith “Linguistic Effects”). Norman French remained the language of the aristocracy and failed to reach English speakers of every class.

The English language experienced extensive linguistic change as a result of the Viking Incursions during the eighth and ninth centuries as well as the Norman Invasion beginning in 1066 (Smith “External”). Although Norman French created a lasting influence on specific areas such as vocabulary and phonology, Old Norse had a more substantial linguistic effect on the English language. Both languages contributed to the sounds of English through phonological addition (Smith “History”). However, the intimate Germanic relationship between the languages of the Anglo-Saxons and Scandinavians allowed for the more profound borrowing of grammatical words like pronouns and verb forms. Because languages rarely borrow grammatical elements from other languages, the Scandinavian influence on third person plural pronouns and the verb to be is evidence of the substantial linguistic effect of Old Norse on the English language.