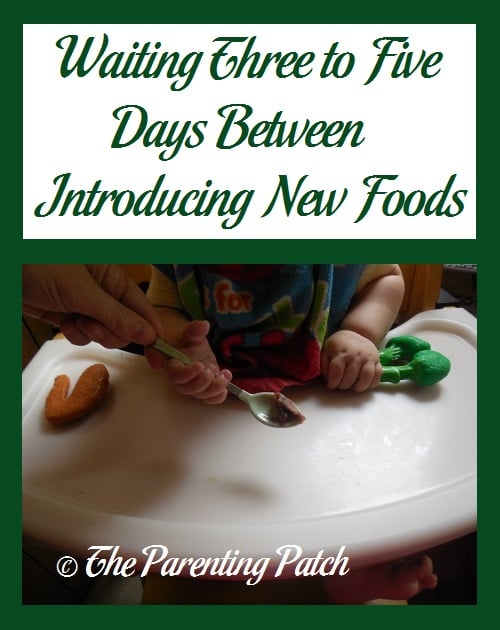 When you started introducing solid foods to your baby, did you follow the “wait X number of days between each new food” rule? Most sources that I have found online recommend waiting three to five days before introducing new foods. When my daughter was an infant, my nurse practitioner mentioned waiting three days between new foods. Waiting a few days between each new food is a simple way to check for possible reactions to new foods such as food sensitivities, food allergies, and digestive issues. However, I will admit that I stopped following the rule quickly with my daughter and did not follow the rule at all with my son.

According to the World Health Organization (WHO), every infant and child has the right to good nutrition. Unfortunately, few children worldwide receive nutritionally adequate and safe complementary foods. WHO and UNICEF both recommend exclusive breastfeeding for the first six months of life followed by the introduction of nutritionally-adequate and safe complementary solid foods at six months with continued breastfeeding up to age 2 or beyond as mutually desired by mother and baby. However, I cannot find any recommendations like the “wait X number of days between each new food” rule on the WHO website. I did find a recommendation from the American Academy of Pediatrics that advised waiting at least two to three days before starting each new food, which differs from the commonly cited “three to five days” rule. With the recommendations unclear, how long should a parent wait before introducing each new food? 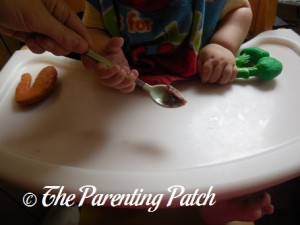 I introduced solids to my babies at exactly six months old. When my daughter was an infant, I first fed her sweet potatoes. I then waited three days before introducing her to avocado. However, I quickly stopped imposing the three-day rule when my husband and I went out to eat at a buffet. My daughter was hungry and wanted to try all the yummy foods that her parents were eating. After I gave her a few bites of guacamole from my plate, I decided that the three-day rule was not necessary for my baby.

With my son, I did not even try to wait any set number of days between each new food. When he turned six months old, I introduced my son to sweet potatoes. Unlike my daughter, my son was not impressed. For the next few months, I tried feeding him small bites of everything and anything. He especially enjoyed the seasoned ground beef from my enchilada at a Mexican restaurant. He would also eat salmon, shrimp, chicken, beans, and other savory foods, but, for the most part, he was not ready for solid food. I did not want to simply give up in case he changed his mind, so I basically offered him a bite of everything that I ate. My daughter was also eager to help feed her little brother and sometimes gave him bites of her food. I therefore absolutely did not follow the three-day rule with my son. (Many parents become more relaxed with subsequent children as well!)

I am a former and current sufferer of food allergies. As a child, I was allergic to a long list of foods including bananas, nuts (not peanuts or pistachios), melons, mango, papaya, carrots, celery, kiwi, and cherries. However, my immune system changed during both my pregnancies, and now my list of food allergies includes only melons (except some varieties of watermelon) and possibly portabella mushrooms. In other words, I am well aware of the symptoms of food allergies and sensitivities. Current research also suggests that waiting to introduce high-risk foods such as peanuts may increase the risk of food allergies. In fact, a new study published in the New England Journal of Medicine found that infants at high risk for peanut allergies who ate peanut products frequently before eleven months were less likely to develop an allergy by age 5.

With my food allergies, my children might be considered at increased risk for their own allergies. However, I also exclusively breastfed by babies for the first six months of life. My daughter then continued nursing until she was two and a half years old, and my son still nurses. Both my kids are growing up in a house with dogs and cats. I also keep the house clean but not sterile. All three factors have been linked to a reduced risk of allergies. I, however, had some formula as a baby, did not have any indoor pets, and lived in home that my mom admittedly kept too clean. Thus, while I have foods allergies that might predispose my children to an increased risk, I have also made other decisions that significantly decrease the risk. Additionally, more and more research indicates that withholding allergenic foods until a child is older does not reduce the risk of a food allergy anyway. Thus, I feel that not sticking to the three-day rule when introducing new foods to my babies is the right decision for my family.

Did you follow the “wait X number of days between each new food” rule? Why or why not?

For more discussion on the topic, check out my “When you started introducing solids to your baby, did you follow the ‘wait X number of days between each food’ rule? Why or why not?” Facebook page thread.