Connect
To Top
InformationAugust 14, 2012 This post may contain affiliate links

Your baby is now the size of an apple, measuring about four (4) inches in length from crown to rump and weighing about two and a half (2.5) ounces. You are in your fourth month of pregnancy.

During week 15 of pregnancy, you may begin to feel your baby moving around inside you. If this is your first pregnancy, you may mistake this early fetal movement for gas. Multiparous moms are more likely to recognize the sensations of baby kicking earlier in the pregnancy than first time moms. Your baby is quite the little acrobat now. He or she can move all of his or her limbs and joints by now and spends many waking hours wiggling and moving around. The legs are now longer and in proportion with the rest of the body. The bones throughout your baby’s body continue to harden.

All of your baby’s internal organs are completely developed by week 15 of pregnancy. Over the next few months, fetal growth will focus on getting bigger, that is, growing from the size of an apple to the size of a pumpkin. In addition to swallowing, your baby is now breathing in amniotic fluid through the nose and upper respiratory tract. This practice breathing helps your baby’s air sacs to develop. Although the eyelids are still fused shut, the eyes begin to sense light. If you shine a flashlight on your abdomen, you may feel your baby move away from the light. Finally, you may be able to determine the sex of your baby through an ultrasound during week 15 of pregnancy, although some babies are stubborn and refuse to let you know if he is a he or she is a she until birth. 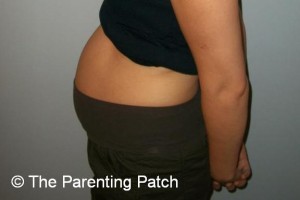 Baby Bump During
Week 15 of Pregnancy

By week 15 of pregnancy, you have probably gained about five pounds, although some women gain less and some women gain more. Remember: The weight gain goal for a woman of a healthy pre-pregnancy weight is twenty-five to thirty-five pounds by the end of pregnancy. Underweight women need to gain more while overweight women may need to gain less. Along with that weight gain, you will now have an obvious baby bump. Your uterus now sits about three to four inches below your belly button, well out of your pelvis now to accommodate your growing baby. Although morning sickness will mostly likely have passed by now, many women begin to suffer from nasal congestion and nosebleeds, both of which are the result of hormonal changes and increased blood flow to your mucous membranes. Other symptoms during week 15 of pregnancy include a changing center of gravity, bloating and water retention, loose joints, heartburn and indigestion, flatulence, headaches, faintness or dizziness, varicose veins, and abdominal achiness.

During week 15 of pregnancy, you may be offered either of two prenatal screening tests. An amniocentesis is performed between week 15 and week 22 of pregnancy and involving removing a sample of amniotic fluid from the amniotic sac. Amniocentesis detects nearly all chromosomal disorders, several hundred genetic disorders, and neural tube defects such as spina bifida and anencephaly. Because amniocentesis is invasive, the test does carry some risks including an increased risk of miscarriage. A second prenatal test, the quadruple marker screening test, measures four chemicals in your blood: alpha-fetoprotein (AFP), human chorionic gonadotropin (hCG), inhibin A, and estrogen produced by the placenta. A quad screen tests for problems such as chromosomal abnormalities including Down syndrome and trisomy 18 and neural tube defects including spina bifida. 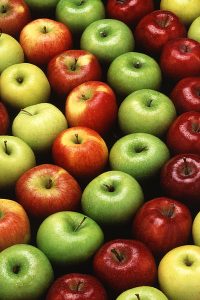 Disclaimer: The information provided in this article is not meant to replace the professional medical advice of your health care provider.