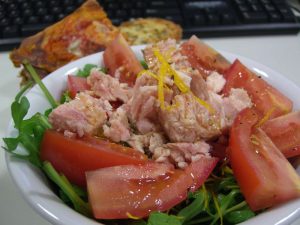 Following one commonly cited piece of advice on solid foods, many parents opt to avoid introducing their children to high allergy foods until after age one or even age two. High allergy foods include eggs, nuts and peanuts, milk, soy, strawberries, wheat, and fish and other seafood. However, recent research suggests that not introducing babies to fish between six and twelve months is linked to an increased risk of asthma.

According to a Danish study based on more than 7,000 children in the Netherlands, children who first ate fish between the ages of six months and one year had a decreased risk of developing asthma-like symptoms later on than children who ate fish before six months or after their first birthdays. In other words, the ideal window for introducing babies to fish is between six and twelve months.

As Jessica Kiefte-de Jong of the Erasmus Medical Center in Rotterdam, the lead author of the study, explains:

For the study, the researchers used health and diet information from a group of 7,210 children born between 2002 and 2006 in Rotterdam. Of the total number of children in the study, 1,281 ate fish in their first six months of life, 5,498 first ate fish in the next six months, and 431 did not eat fish until after age one.

The researchers then looked at health records for when the children were about four years for reports from parents of wheezing or shortness of breath. Of the children who did not eat fish until after their first birthdays, between 40% and 45% of parents reported asthma-like symptoms in their children. However, only 30% of parents reported wheezing or shortness of breath in the children who first ate fish when they were between six and twelve months old.

In other words, children who were first introduced to fish between six and twelve months had a 36% decreased risk of developing asthma-like symptoms.

Even though I suffered from food allergies as a child and still have some food allergies even after outgrowing many of my sensitivities to certain foods, I have not been following the advice to avoid giving my daughter high allergy foods until she is at least one. She was exclusively breastfed until six months. Now that she is eleven months old, she has even almost every food possible including nuts, peanuts, strawberries, dairy products, and, yes, fish. So far she is a healthy little girl who does not have any health problems despite my having asthma and allergies. I credit the six months of exclusive breastfeeding, something that I did not have as a child. This most recent study confirms my belief that I should not delay giving her high allergy foods so long as she does not show any signs of an allergic reaction.

When did you first give your baby fish?

Feeding your baby fish at the wrong time could cause asthma problems down the road: http://thestir.cafemom.com/baby/146676/feeding_your_baby_fish_at
Mercury levels in fish: http://www.americanpregnancy.org/pregnancyhealth/fishmercury.htm
When babies eat fish could be linked to asthma: http://vitals.nbcnews.com/_news/2012/11/13/15145278-when-babies-eat-fish-could-be-link-to-asthma