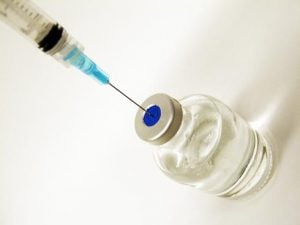 A new study from the United Kingdom concludes that that the whooping cough vaccine is safe for women in their third trimester of pregnancy.

Whooping cough, also known as pertussis, is a highly contagious disease. Pertussis has recently experienced a rapid increase in infections resulting in the death of some infected newborns. Because of the increase in whooping cough cases, the UK developed a new vaccine program for the disease in 2012.  The program has already provided free shots for more than 700,000 women in their third trimester of pregnancy. Government officials also made sure that those mothers were given vaccinations for diptheria and polio.

By receiving the whooping cough vaccination, mothers are able to pass on some of their protective antibodies to their child before birth. Those antibodies are able to protect newborns until they are old enough to be vaccinated.

Along with officials in the UK, the Centers for Disease Control and Prevention (CDC) in the United States recommends that pregnant women receive the whooping cough vaccination.

Researchers in the UK analyzed 20,074 pregnant women who were vaccinated in 2012. The study found that, compared to country-wide estimates, there was no increased risk of stillbirth among vaccinated women. In fact, whooping cough vaccination pregnancies resulted in five stillbirths in the two weeks following vaccination while the existing data predicted about seven stillbirths in the same time frame for non-vaccinated pregnant women.

Researcher Philip Bryan, who worked on the study for the Medicines and Healthcare Products Regulatory Agency (MHRA) in London, also reveals that researchers examined similar but unvaccinated pregnant women from the previous two years. His groups analysis found no increase in other pregnancy risks after vaccination including death of the mother or baby, pre-eclampsia, miscarriage, C-section delivery, or low birth weight.

The whooping cough vaccine when given in the third trimester also did not result in earlier labor than unvaccinated women.

In the United States, the CDC recommends that children receive the DTaP vaccination based on the following schedule: 2, 4, and 6 months, at 15 through 18 months, and at 4 through 6 years. DTaP protects against diptheria, tetanus, and pertussis.

It should be noted that several side effects can occur when taking the pertussis vaccination. Mothers can experience  redness and swelling at the vaccine site, fatigue, and fever.