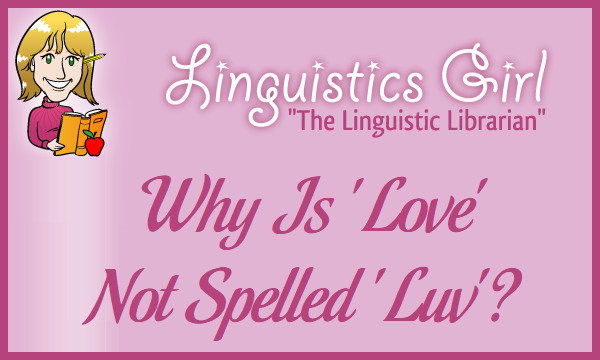 Have you ever thought about the English language and considered the orthographic system downright wacky? Many words have a “silent e” at the end and others have a “silent b” in the middle. Not even the second month of the year gets away without an r that may or may not be pronounced. Befuddling as English spelling initially seems, delving more deeply into orthography reveals a rich history of individual and groups of words. For example, why is love not spelled luv?

The word love meaning “an intense feeling of deep affection” or “to feel deep affection for” is pronounced as [lʌv]. In many English words with a mid-central vowel, the [ə] or [ʌ] is written with the letter u as in up, ugly, under, subtle, and supper. Other words with the same vowel sound are written with the letter o as in love, oven, month, of, son, come, shove, other, mother, brother, won, wonder, honey, and dove (the bird, not the simple past of dive). Modern love comes from the Old English lufu (noun) and lufian (verb) of Germanic origin. Pronunciation of the word started as loo-voo [luvu] and shifted to low-vuh [loʊvə] in Middle English.

With the pronunciation change of [loʊvə] in Middle English also came a spelling change. The verb was spelled as loven and lovien and the noun as love. The change is the result of the spelling conventions of Norman scribes after the Norman invasion of 1066. At the time, the letters v, u, and n were written identically with two minims. A minim is a short, vertical stroke used in handwriting and is the basic stroke for the letters i, m, n, and u in uncial script. The letter w was written as two u letters and the letter m with three minims. Handwritten manuscripts were thus filled with minims. Texts became visually unclear for scribes and readers. The problem was especially confounding in words such as luve, wunder, and munth.

The change from u to o in English spelling thus resulted from the graphical confusion that occurred with sequences of multiple minims. To make vowel-consonant sequences clear, scribes replaced u with o, breaking up minims and making texts easier to read. Luve thus became love. The orthographic convention of replacing u with o affected other words of Germanic origin such as come (originally cume), honey (originally hunig), and son (originally sunu). Thus, the modern spelling of love results from the ambiguity of the Middle English spelling system. As with other non-phonetically spelled words, the key to understanding Modern English orthography is to look past pronunciation and delve into the history of the words. The spelling of [ə] or [ʌ] with the letter o rather than the letter u stems from graphical confusion during the Middle English period.

For information on the letter e at the end of love, see The Functions of “Silent E” in Written English.