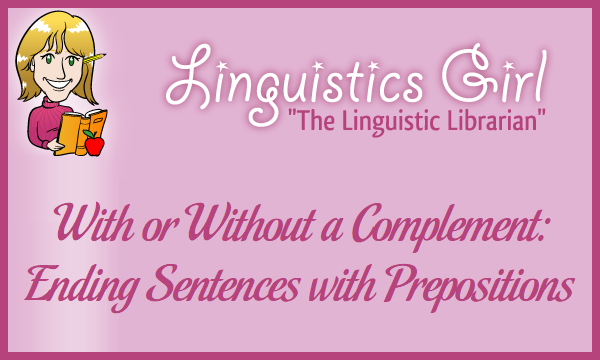 Well, when the first English grammars were recorded in writing, the early English grammarians tried to force the English language into a Latin grammar model. As a Germanic language, however, English refuses to fit neatly into the grammar rules for Latin and its related languages. But, those first English grammarians still tried. And, since Latin could not have sentences that ended with prepositions, neither could English. Students have since been tortured for years with the irrelevant grammar rule “do not end sentences with prepositions.”

Winston Churchill once said, “Ending a sentence with a preposition is something up with which I will not put.” This statement aptly illustrates that some prepositions in English must be placed at the end of sentences, or rather directly after the verb, as in put up with. Such verbs that are formed by a verb followed by one or more prepositions are called phrasal verbs. Other example of English phrasal verbs include wake up, run into, and throw up. The prepositions in such verbs function as particles and are required for the meaning of the verbs. And, as Churchill demonstrates, the movement of such prepositions to before the verb results in an awkward, if not grammatically incorrect, sentence construction. The third example of When did you get up? can only occur with the preposition at the end of the sentence, never *When did up you get?