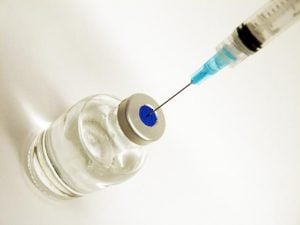 As autumn continues and eventually transitions into winter — and flu season — the Centers for Disease Control and Prevention (CDC) in conjunction with the World Health Organization (WHO) and the American Academy of Pediatrics (AAP) recommend that all individuals who are at least six months of age receive a flu vaccine. The flu shot saves lives. Between 1976 and 2007, an estimated low of about 3,000 to a high of about 49,000 Americans died from the flu or complications associated with the flu. Receiving a flu vaccine significantly decreases the risk of contracting the easily preventable illness. Furthermore, vaccinated individuals who do contract the flu usually experience a milder form of the disease. Widespread vaccination also benefits individuals who cannot receive the flu vaccine such as infants under the age of six months.

Unfortunately for vaccination efforts, misinformed and uneducated fearmongers all too often post ridiculous claims against the flu shot online. One such example comes from a website entitled Real Farmacy. Ignoring the misspelling of the word pharmacy — How can I trust a source that claims to have the “real deal” information but that cannot spell a key word correctly? — I must respond to the erroneous and potentially dangerous lies that the author of the post attempts to propagate.

Lie 1: The flu shot actually makes you sick to begin with.

The flu shot contains a dead flu virus. A dead virus cannot make you sick. Therefore, the flu shot cannot give you the flu. Side effects of the flu shot, and any injection, include redness, swelling, and irritation at the injection site as well as fever and achiness. However, the fever and achiness associated with the flu shot are merely side effects that indicate that the immune system is working to create immunity against the flu virus. If you experience these symptoms, you are experiencing a side effect, not the flu. The flu shot does not and cannot give you the flu.

Lie 2: Flu vaccines contain other dangerous ingredients such as mercury.

The flu shot contains mercury (thimerosal) as a preservative. However, thimerosal-free versions of the flu shot are also available. However, according to a 2003 study published in Pediatrics, the researchers could find no consistent significant associations between vaccines that contain thimerosal and neurodevelopmental outcomes. Preservatives, on the other hand, kill or prevent the growth of microorganisms, particularly bacteria and fungi, in vaccines. Furthermore, thimerosal is approximately 50% mercury by weight, meaning that the preservative is not exactly the same as regular mercury. Thimerosal is metabolized or degraded to ethylmercury and thiosalicylate. Ethylmercury is an organomercurial that should be distinguished from methylmercury, which is linked to health problems. Remember that a single molecule distinguishes hydrogen peroxide from water. Ethylmercury is as different from methylmercury as water is from hydrogen peroxide.

Lie 3: The flu shot can cause Alzheimer’s disease.

According to the Alzheimer’s Association, several mainstream studies link flu shots and other vaccinations to a reduced risk of Alzheimer’s disease and overall better health. The doctor who proposed the link between the flu shot and Alzheimer’s was suspended by the South Carolina Board of Medical Examiners, thus eliminating any credibility to the theory.

Unlike other vaccines, the composition of the flu shot changes every year. From research to manufacturing to distribution, flu shots cost time and money for pharmaceutical companies. Furthermore, because too many people decide to skip the flu shot, most manufacturers usually end up making more vaccines than used, resulting in an unuseable surplus. For the majority of Americans, a flu shot costs about $30. The real question is: Why are flu shots so inexpensive to patients when the cost of research, manufacturing, and distribution is so much more?

Additionally, hospitalization for the flu costs thousands of dollars per hospitalized individual. Preventing the flu with as something as easy as a flu shot saves medical resources, medical resources that could be used for you in the event of a medical emergency. So, who exactly is benefiting the most from the flu shot? Definitely not the pharmaceutical companies but rather you and me everyday Joe Schmoe. Honestly, if I needed hospital services, I would not want you taking up time, space, and resources with an illness as preventable as the flu. Selfish, yes, but, hey, humanitarian arguments all too often fall on deaf ears.

Lie 5: Lack of real evidence that young children even benefit from flu shots.

Lie 6: Makes you more susceptible to pneumonia and other contagious diseases.

Lie 8: Children under the age of 1 are at risk.

The American Academy of Pediatrics (AAP) recommends that all individuals who are at least six months of age receive a flu vaccine. Children under the age of two are at an increased risk for complications from the flu. During the 2012-2013 influenza season, more than 150 flu-related pediatric deaths were reported in the United States. However, the flu shot is not currently recommended for children under the age of six months. Many other medications are also not recommended for young children for a variety of reasons. The best way to keep a young infant safe from the flu is for all caregivers and anyone else who comes in contact with the child to be vaccinated. That young infants should not receive the flu vaccine does not negate the benefits for individuals over the age of six months.

Guillain-Barré syndrome (GBS) is a rare disorder in which your immune system damages your nerve cells, causing muscle weakness and sometimes paralysis. GBS can cause symptoms that last for a few weeks. However, most affected individuals recover fully from GBS. GBS is rare, but, in 1976, there was a small increased risk of GBS following vaccination with an influenza vaccine made to protect against a swine flu virus. More recent flu shots have not been linked to an increased risk of GBS. Furthermore, severe illness and death are associated with the flu. Unlike GBS, complications of the flu are not rare.

Despite the claims from the misspelled and uncited Real Farmacy, the flu shot is safe. Furthermore, complications from the flu, which include hospitalization and death, far outweight any theoretical risks of the flu shot. The flu kills. An effective way to prevent the flu is through vaccination with the flu shot. For more information, check out my sources as listed below (which are conspicuously lacking from the fearmongering post that sparked my response).