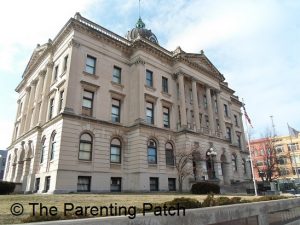 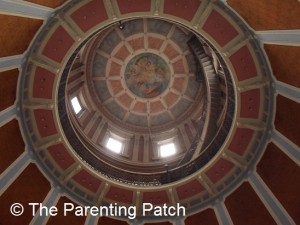 Our first stop at the McLean County Museum of History was the interactive Harriet Fuller Rust Pioneer Neighborhood/Discovery Room on the third floor of the building. Designed for kids to discover the lives of pioneers with hands-on display, the Harriet Fuller Rust Pioneer Neighborhood/ Discovery Room offered Poppy a chance to explore part of the museum on her own. She was confused by the heaviness of a cast iron pot and was amazed by the hanging water buckets.

Also in the Harriet Fuller Rust Pioneer Neighborhood/ Discovery Room, Poppy also really like climbing in and out of the replica outhouse. James and I also had fun snapping pictures of each other in the outhouse as well as with the water buckets. Poppy was not quite as amused by being held up under the water bucket carrier, but James and I enjoyed taking a picture of each other!

Our next stops in the museum were the Irish exhibit and the Fiesta exhibit. I thought that a small Irish dress was adorable. Poppy would look cute in plaid. Inside the Fiesta exhibit, James helped Poppy color a skill mask for Cinco de Mayo. I had fun creating an Eye of God out of two little sticks and some pretty colored yarn.

My favorite part about the McLean County Museum of History was that all of the exhibits included some sort of hands-on activity for children. The rest of the museum consisted of a permanent exhibit entitled Encounter on the Prairie. The four galleries of the exhibit were the People Gallery, Work Gallery, Politics Gallery, and Farming Gallery. Poppy really loved playing with the school bell and light bulb in the Politics Gallery. She also found the book display right away in the People Gallery. Her favorite hands-on activities, however, were listening to the voices on the phone in the People Gallery and playing with the typewriter in the Work Gallery.

Have you been to any interesting history museums in your area?