Connect
To Top
BlogSeptember 6, 2015 This post may contain affiliate links

With my husband living and working in New York City, my children and I have had the opportunity to explore the surrounding area. During our first visit to New York, we focused on parks and children’s museums. One place that my daughter especially loved was Imagine That!!! A New Jersey Children’s Museum in Florham Park, New Jersey. Conveniently located a few minutes off of Interstate 287, Imagine That!!! cost just $9.95 for me and $10.95 for my daughter (with infants under age 1 free). 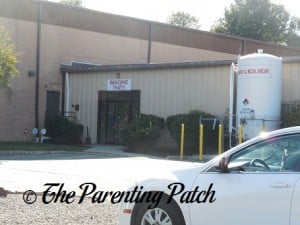 I was definitely surprised when I walked in Imagine That!!! The place was huge, covering 16,000 square feet chock full of exhibits that encourage preschool age and young school children to touch, discover, learn and explore. The museum additionally contains a small café that offers a number of moderately priced snacks and beverages such as soft pretzels, nachos, fruit, soda, milk, and juice.

As soon as my daughter entered Imagine That!!!, she headed straight for a huge wooden pirate ship complete with a gangplank ramp and slide. She loved running up the ramp, climbing to the top of the ship, and then swooshing down the slide. Our next stop was a small two-story climber. She enjoyed hanging from the punching bags, climbing up the rope steps, and sliding down the twisty tube slide. I liked that the museum had exhibits that allowed my exuberant preschooler to get some of her energy out. 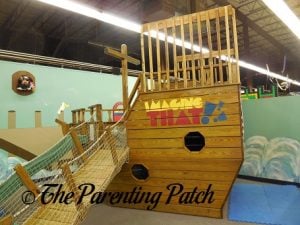 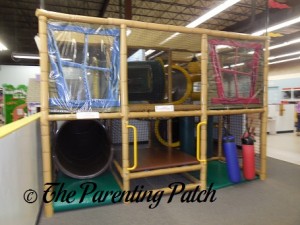 After running and climbing for a bit, my daughter headed to an exhibit of vehicles including a fire truck, car, airplane, and motorcycle. She especially liked sitting and playing on the motorcycle because her two uncles (and Papa) ride motorcycles. She even asked me to take a picture of her to send to her uncles and daddy. 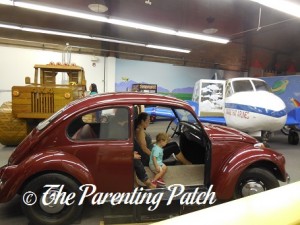 Other smaller exhibits at Imagine That!!! that my children liked included trains, musical instruments, building blocks, and a huge Lite Brite. My son really liked watching the motorized trains drive around and around the tracks. He also like playing with the colored rods of the Lite Brite. My daughter enjoyed playing make-believe in the play Victorian home, grocery store, post office, news room, dance studio, dentist office, doctor’s office, and veterinary clinic. She even found another little girl to play with part of the time. My daughter also enjoyed making a few crafts all by herself in the small art studio. 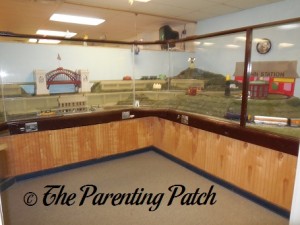 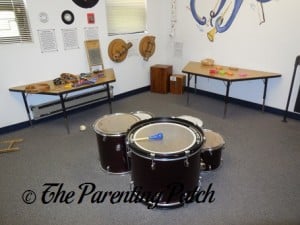 My daughter’s two favorite exhibits, however, were the huge sand caste sandbox and the shadow room. She spent a good twenty minutes digging in the sand, and she even played nicely with a toddler boy in the sand box for a few minutes. The shadow room then captured her attention the most. We went back to the exhibit for a total of three times! The room included a wall painted with special paint that captured shadows. My daughter stood against the wall while I turned on the light. When I turned the light off and she stepped away from the wall, her shadow remained frozen. She had a great time making different shadow pictures by herself and with two other little boys. She was most proud of her spider hand shadow and her three shadows holding hands. 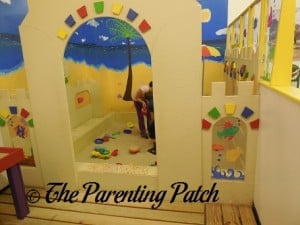 If you are in the New York City area with younger kids and have some time to kill, I highly recommend Imagine That!!! A New Jersey Children’s Museum in Florham Park, New Jersey. My kids and I spent four and a half hours at the museum, and my daughter begged me to go back sometime as soon as we left at closing. Imagine That!!! is definitely a fun family activity for preschoolers through young school children.

For more information, visit the Imagine That!!! A New Jersey Children’s Museum website.