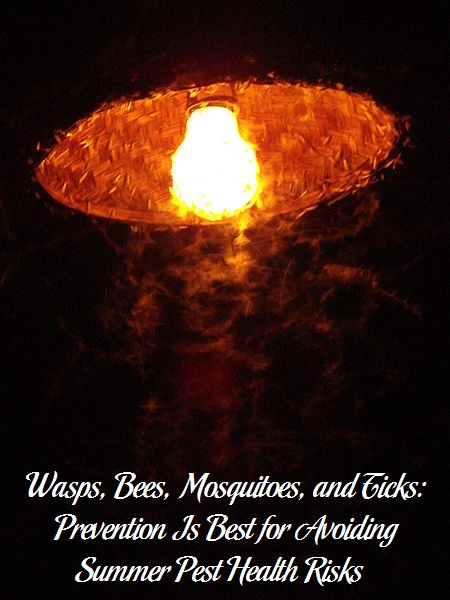 Summer is a great time for getting outdoors. Unfortunately, wasps, bees, mosquitoes, and ticks are also fond of the warm weather but can pose serious health hazards to humans. The best way to avoid summer pest health risks is prevention. 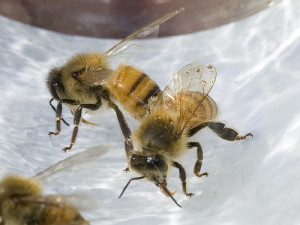 If you have ever ventured outdoors during the summer, you may have encountered a wasp or a bee. Without wasps and bees, most of the plants that produce food for us would not be pollinated and our food supply would diminish. Last summer in an ill-fated attempt to rid my garden of Japanese beetles, I inadvertently eliminated all the bees as well. As a result, my later plantings failed to pollinate. Sadly, my pumpkin patch failed to produce any pumpkins last year. To prevent the same problem from happening this year, I am avoiding all chemical insect repellants and am instead using cannas, which Japanese beetles love, as companion plants and nylon stockings over my squashes, pumpkins, and watermelons as a barrier against bugs.

For the most part, bees and wasps will leave you alone as long as you leave the stinging insects alone. Unfortunately, for a small percentage of the population, an insect sting can prove fatal. Of the approximately 1% to 3% of the population with an allergy to bee and wasp venom, about 50 to 100 individuals die each year from insect stings. Non-life-threatening reactions to a bee or wasp sting include hives, swelling, nausea, vomiting, abdominal cramps, and headaches. Life-threatening reactions include shock, dizziness, unconsciousness, wheezing and difficulty breathing, and throat swelling. An allergic reaction as a result of a wasp or bee sting requires immediate medical attention.

The best way to protect yourself and your family is to remove wasp and bee nests from your property. Depending on the severity of the problem, you may need to call in a professional to eliminate the problem. Earlier this year, my husband and I noticed a few wasps flying around our back patio near our back door. Upon looking around our house, we discovered a small wasp nest at the top of one of our gutter drains. To prevent the problem from escalating, we immediately sprayed the nest down with our hose, destroying the nest before more wasps could settle in. A few bees and wasps on in your garden is good because the insects will help pollinate your plants. A bee or wasp nest too close to your home, however, is just asking for trouble. 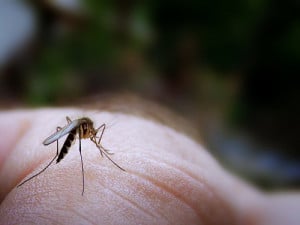 Dusk is an enticing time of day during the summer. As a kid, I loved going outside as the sunset to catch lightning bugs and then look at the stars in the sky with my dad. Unfortunately, mosquitoes love dusk just as much as humans. In addition to pesky bug bites that itch like crazy, mosquitoes can also transmit diseases such as Zika, West Nile Virus, Murray Valley encephalitis, Ross River and Barmah Forest viruses, and malaria.

Symptoms of a West Nile infection range from mild fever, headaches, body aches, fatigue, and back pain to more serious high fever, disorientation, stupor or coma, tremors, convulsions, and paralysis. Murray Valley encephalitis presents as fever, headaches, nausea, and vomiting. Infection with the Ross River and Barmah Forest viruses includes symptoms such as rash, flu-like symptoms, and rheumatic symptoms. Although less common in the United States than in other parts of the world, malaria is still a risk with symptoms including fever, chills, headache, sweats, fatigue, nausea, vomiting, dry cough, muscle or back pain, and an enlarged spleen. All four mosquito-borne illnesses can also result in death, especially in more susceptible individuals including the very young and very old.

Prevention of the illnesses transmitted by mosquitoes is as easy as avoiding contact with mosquitoes. Your best defense is to stay inside during peak mosquito hours. Right before dusk through the early hours of the night is the most active time of day for these pesky insects. With my daughter, I chose to keep her inside around dusk to avoid mosquitoes all together. However, if you must be outside during peak mosquito time, use an insect repellent that contains diethyl toluamide (DEET) or picaridin. Natural insect repellants such as citronella work okay, but your best defense is a chemical repellant. To avoid unnecessary chemical exposure, I again prefer to keep my family inside and away from mosquitoes around dusk. 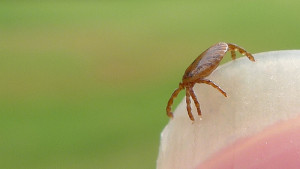 Ticks are another insect common during the summer that can cause serious health problems for humans. The tick is a bloodsucking external parasite of humans, pets, livestock, and wild animals. This wingless insect most notably spreads Lyme disease. A Lyme disease infection causes fever, headache, fatigue, depression, and a characteristic circular skin rash. If left untreated, the illness can cause problems in the joints, heart, and central nervous system that become increasingly difficult to treat and may result in permanent disability. At one point, a vaccine for Lyme Disease was available. However, the vaccine was discontinued in 2002 due to low demand.

Another disease spread by ticks is Rocky Mountain Spotted Fever (RMSF). Potentially fatal, symptoms of RMSF include fever, headache, abdominal pain, vomiting, lack of appetite, muscle pain, red eyes, and rash. However, the rash is often absent during the first few days of the illness, and some infected individuals never develop the rash at all. Treatment is available but works most effectively if started before the fifth day of infection. If not treated within the first eight days, RMSF is exceedingly fatal. Long-term health problems can also occur, even after treating the illness.

As with mosquitoes, the best way to prevent a tick bite is to avoid the habitats in which ticks live such as densely wooded areas. If you must venture into a tick zone, wear long sleeves and pants and use an insect repellent that contains DEET. Natural insect repellants are not as effective against ticks. Thoroughly check your body for any ticks once you leave the area. If you have pets such as dogs or cats, a flea and tick medication can prevent the spread if tick-borne illnesses. I always treat my cat and dogs with Frontline once a month to prevent fleas and ticks. I know that Frontline works because my pets never get fleas. The one tick that I found on Espen had died because of the anti-tick medication. Prevention is by far the best way to avoid the health hazards from common summer pests including ticks, mosquitoes, and bees and wasps.

How do you avoid the health risks associated with summer pests like wasps, bees, mosquitoes, and ticks?