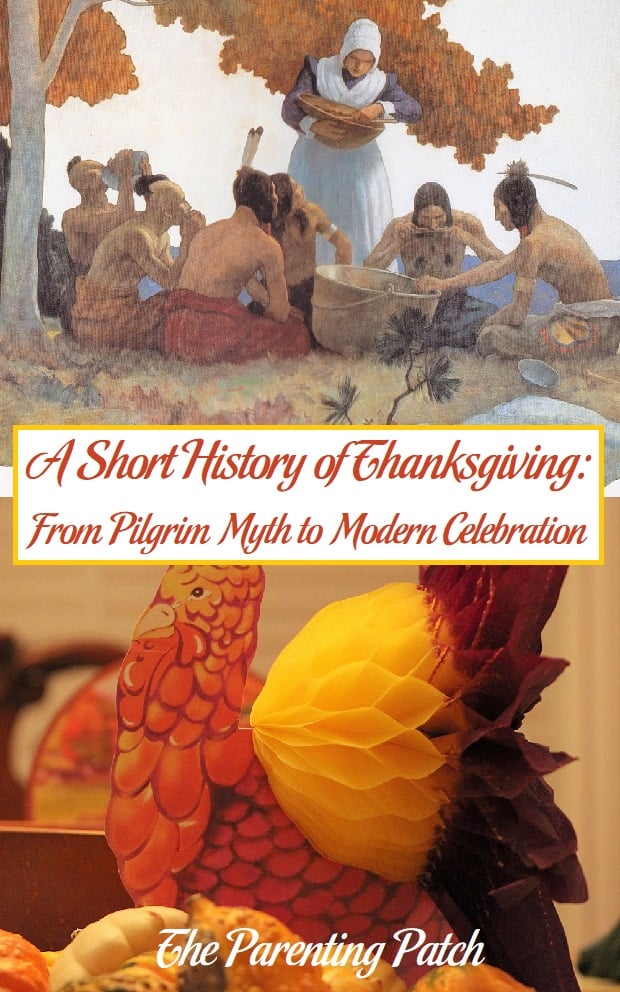 Do you recall the story of the first Thanksgiving? In 1620, 120 passengers including the English Puritans now referred to as the Pilgrims crossed the Atlantic Ocean and established the Plymouth Colony in the southeastern portion of contemporary Massachusetts. After a devastating first winter in the New World, only 53 of the original colonists remained, the other half having died from disease and starvation. With the help of the local Wampanoag tribe and a native man named Squanto, the remaining Pilgrims learned to farm corn and built up a supply of food to last through a second winter. To celebrate the successful first harvest, the Pilgrims invited the Wampanoag to a thanksgiving feast. The celebration was the first Thanksgiving of 1621.

Except that the events of the autumn of 1621 were neither a thanksgiving nor the first. Furthermore, little is known for sure about the feast except for the single-paragraph account recorded in a letter dated December 12, 1621 written by Edward Winslow, one of the Separatist leaders of Plymouth Colony:

“Our harvest being gotten in, our governor sent four men on fowling, that so we might after a special manner rejoice together after we had gathered the fruits of our labors. They four in one day killed as much fowl as, with a little help beside, served the company almost a week, at which time, amongst other recreations, we exercised our arms, many of the Indians coming amongst us, and amongst the rest their great king Massasoit, with some ninety men, whom for three days we entertained and feasted, and they went out and killed five deer, which they brought to the plantation and bestowed on our governor, and upon the captain and others. And although it be not always so plentiful as it was at this time with us, yet by the goodness of God, we are so far from want that we often wish you partakers of our plenty.”

The exact date of the feast, which took part in Plymouth, known to the native people as Patuxet, is unknown and could have occurred any time in the fall of 1621 after the harvest, most likely between September and November. The celebration lasted at least three days. Four Puritan men hunted fowl, probably geese, ducks, and wild turkey. At least ninety Wampanoag men including Massasoit, an important leader, attended the event and brought five deer to the feast. The attendees spent time doing recreational activities including firing weapons. All other details to the story are future embellishments that create an origin myth for the United States.

Details lacking aside, the celebration of 1621 was also not a thanksgiving in the minds of the English Puritans. At the time, a thanksgiving was solemn day of prayer and worship to thank God for a special blessing. Later New Englanders would attend two church services on days of thanksgiving. Puritans also proclaimed fast days during which people fasted, prayed, repented for their sins, and asked God for help. Both public days served as replacements for Catholic holidays. Both often occurred on a Thursday to avoid the Sabbath and the days before and after. However, the feasting, diplomacy, and recreation described by Winslow were typical of a harvest feast and not of a thanksgiving as the Puritans recognized the term. Thanksgivings were purely religious days. Furthermore, earlier celebrations more akin to a first Thanksgiving occurred in other parts of present-day America including Maine, Virginia, Texas, and Florida. The harvest celebration of 1621 celebrated by the Puritans of Plymouth was neither a Thanksgiving nor the first.

If all that remains of the autumn events of 1621 is a short account in a single letter, how did Thanksgiving actually start in the United States? The answer lies in New England but at a much later date and with a woman named Sarah Josepha Buell Hale. While she remains largely unknown today, Hale was influential during her lifetime. She was educated at home by her mother because her parents believed in the full education of both boys and girls, a rare sentiment at the time. As an adult, she edited the most widely circulated and influential American magazine of the day, Godey’s Lady’s Book, for forty years. She wrote at least two dozen books and the poem “Mary Had a Little Lamb,” among other accomplishments. Hale also worked tirelessly to establish Thanksgiving as a national American holiday.

Various leaders had proclaimed thanksgivings in the infant United States as soon as Europeans began moving to (invading rather) the country. However, such public days occurred randomly in response to other events such as military victories, the end of disease, or bountiful harvests. No annual celebrations of thanksgiving yet existed. The celebration of 1621 was also all but forgotten, the story playing no part in thanksgivings of the seventeenth and eighteenth centuries. The Continental Congress proclaimed the first national Thanksgiving Day during the Revolutionary War on December 18, 1777 to celebration the defeat of the British army at Saratoga, New York. George Washington declared two days of thanksgiving during his presidency. John Adams and James Madison also recommended national thanksgivings, but no more presidential thanksgiving proclamations occurred for the next forty-eight years of the early United States.

While April 13, 1815 marked the final national day of thanksgiving for the young nation for almost five decades, individual cities, states, and territories continued to declare thanksgivings throughout the years. The practice really took off as New Englanders spread throughout the growing country. By 1850, one and a half million people had relocated from New England to western New York, Pennsylvania, Ohio, Michigan, Wisconsin, Iowa, Indiana, and Illinois as well as in the south and western territories. With New Englanders came the social institution of declaring days of thanksgiving.

A New Englander herself, Sarah Josepha Buell Hale had been born in New Hampshire and recommended the New England Thanksgiving holiday as a part of the New England culture that the rest of the nation should adopt. She included two chapters on Thanksgiving in her novel Northwood: Life North and South and, using the growing readership of her magazine as a base of influence, published stories, poems, cooking advice, and more for Thanksgiving in Godey’s Lady’s Book starting in 1846. Other magazines soon followed. She also wrote personal letters to the governors of every state and territory and to presidents Zachary Taylor, Millard Fillmore, Franklin Pierce, James Buchanan, and Abraham Lincoln.

The mid-nineteenth century also brought the myth of the first Thanksgiving to the American people. The short account by Edward Winslow in his letter to his friend in England had been lost to history until Alexander Young published the book Chronicles of the Pilgrim Forefathers in 1841. Young included the lost letter in the book and added a footnote that named the harvest celebration described by Winslow as “The First Thanksgiving.” The footnote is the earliest reference to date found by historians that refers to the events of 1621 as the first Thanksgiving. But the story took hold with the American public and American schools in particular. Both the terms first Thanksgiving and Pilgrim became increasingly conflated with the harvest feast celebrated by the Puritans from the nineteenth century on.

Individual states and territories declared their own days of thanksgiving, with the holiday declared in all thirty states and two territories by 1860. The beginning of the Civil War in 1861 complicated efforts to declare a national Thanksgiving holiday, but Abraham Lincoln proclaimed two days of Thanksgiving for military victories in 1862 and 1863. In the fall of 1863, Lincoln also declared another day of thanksgiving, one very different from previous proclamations. The holiday fell on the last Thursday in November and was not linked to any specific event but was rather a general call for giving thanks. The next year, Lincoln again proclaimed the last Thursday in November Thanksgiving. After Lincoln was assassinated in April 1865, President Andrew Johnson set the first Thursday in December as a day of thanksgiving but moved the annual holiday back to the last Thursday of November the next year. The tradition continued each year until 1939.

Thanksgiving continues to evolve. From a humble beginning as a solemn day of prayer and worship, the holiday transformed into a day of family, friends, and feasting. Just as a national Thanksgiving took root in New England and spread throughout the country, the holiday menu too began with New England favorites. Turkey has been the centerpiece of the Thanksgiving Day table from nearly the beginning and may have been eaten in 1621 as the fowl hunted for the feast. Cranberries are native to New England, but, if the Puritans ate cranberries, the tart fruit would have been unsweetened due to a lack of sugar and most likely used to sharpen broths and sauces, not in the sweetened cranberry sauce of today. Likewise, pumpkin would have been served mashed or boiled in the early years of the nation but would eventually form the basis of the ubiquitous pumpkin pie once additional food supplies arrived from Europe on ships. Chicken pie, plum pudding, and mincemeat pie were once popular dishes that no longer regularly grace the American Thanksgiving table. The traditional menu really changed after World War II, with cultures throughout America and around the world contributing new dishes and tastes to the feast.

Modern Thanksgiving is a hodgepodge of traditions and flavors. The big meal remains the centerpiece of the celebration, as does the gathering of family and friends. Much like the feast of 1621, people all over the country engage in recreational activities. Most do not show off their shooting skills; parades, football, and other sports fill the time before and after eating instead. The menu has changed over the years, and, while many pray before the feast, most no longer attend one, let alone two, church services. Most of the details in the story of the first Thanksgiving of 1621 are embellished at best (and largely made-up), with known details lacking aside from the few sentences Edward Winslow wrote in the only surviving record of the event. The fictionalized tale provides an origin myth for the United States, but one that is not without controversy. By focusing on the Pilgrims, the myth of the first Thanksgiving fails to recognize the contributions and history of native people, Americans who lived in America long before the birth of the young nation.

Thanksgiving is one of the few national holidays in the United States. (More accurately, Thanksgiving is one of ten federal holidays because, unlike in many other countries, the American Congress has the power to create holidays for federal institutions only.) The holiday is one of few that all Americans can celebrate together. Thanksgiving is not without controversy, with the social upheaval of the 1960s and 1970s causing many social activists to question the appropriateness of the day. In 1970, the United American Indians of New England (UAINE) organized the inaugural National Day of Mourning to protest the continued misrepresentation of Native American and colonial experience, including the “first Thanksgiving” story. Protests continue today in light of the racism, sexism, classism, and bigotry still rampant in American society.

The history of Thanksgiving is not as simple as a national holiday springing forth from Pilgrims sitting down with Native Americans to enjoy a celebratory feast. The road to modern Thanksgiving is filled with missteps, misinformation, and many winding paths that eventually come together to form the celebration of today. The question now seems to be not whether Americans will continue to celebrate a national day of Thanksgiving but how.