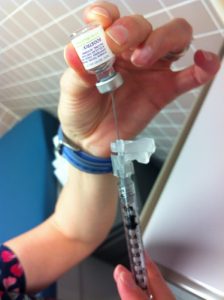 Diphtheria is a highly contagious disease caused by the bacterium Corynebacterium diphtheriae. The disease is a bacterial infection in the upper respiratory tract. Symptoms include weakness, sore throat, fever, swollen neck glands, and difficulty breathing. The breathing difficulties associated with diphtheria are the result of a thick gray coating in the nose or throat called a “pseudomembrane.” Formed from the dead tissue caused by the toxin that is produced by the diphtheria bacteria, the pseudomembrane can build up over the nasal tissues, tonsils, voice box, and throat. In addition to breathing difficulties, the toxin is also absorbed in the blood stream causing damage to the heart, kidneys, and nerves. Diphtheria is spread through the air and through direct contact with an infected individual.

Diphtheria is highly preventable with vaccination. Four combinations of vaccines are available in the United States to prevent the illness: DTaP, Tdap, DT, and Td. All four of the vaccines prevent both diphtheria and tetanus. The DTap and Tdap vaccines also prevent pertussis, or the whooping cough. Children under the age of 7 years old receive the DTap and DT vaccines while older children, teenagers, and adults receive the Tdap and Td vaccines.

As with all vaccines, minor reactions to the diphtheria vaccine include pain and redness at the injection site, headache, fatigue, low fever, diarrhea, body aches, or a vague feeling of discomfort. The minor side effects of the vaccine generally do not require medical attention.