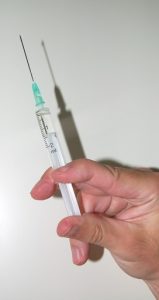 Anyone who knows anything about me knows that I am a huge proponent of childhood vaccination and vaccination in general. The vaccination controversy attempts to persuade parents into believing that childhood vaccination is bad. However, the evidence from the scientific community proves time and time again that the benefits of vaccines outweigh the risks. No, vaccines do not work for 100% of the population 100% of the time. The Center for Disease Control (CDC) has never made such a claim. Yes, children receive greater numbers of vaccines today than in years past; however, the increased number of childhood vaccines is based on the fact that vaccination works to prevent disease and subsequently the injury and death that can results from preventable diseases.

Readers of my blog know where I stand in the vaccination controversy. Based on current scientific evidence of the efficacy and safety of vaccines, I am 100% in favor of vaccination. So why am I writing another post on the topic? Because of something I read in an article entitled “CDC still listening to youth vaccination debate.”

Recently, the CDC has made a recommendation for meningitis immunization for infants. In the past, the vaccine was only recommended for children between the ages of eleven and eighteen. Great! I am all for vaccines. If a new vaccine that will protect babies as young as nine months from the rare but always dangerous meningitis, then I am all for the new recommendation.

“In recent years, other additions to the recommended vaccine schedule have been met with outrage from a small but vocal group mostly of parents who say vaccines are more dangerous than the diseases they prevent and can cause serious disorders such as autism….The influence of these groups has caused anxiety over vaccines, leading to clusters of partly or wholly unvaccinated children. Health officials worry that if more parents opt out of vaccinating their children, rare childhood diseases will resurge. And that makes introducing a new recommendation to the schedule a sensitive event, leading the CDC to gather public input about this latest proposed addition.”

Yes, in terms of the vaccination controversy, I am saddened that parents and some so-called medical professionals continue to believe that vaccines are more harmful than beneficial. The scientific evidence proves otherwise. As the article also states:

“Scientific studies — dozens of them involving hundreds of thousands of study subjects from around the world — have failed to find data supporting those hypotheses.” In other words, there is no evidence whatsoever that suggests vaccines are bad.

What upsets me is that the CDC would even consider asking the public for input on vaccination recommendations. Sorry! The CDC should make vaccine recommendations based on scientific evidence, not public opinion. If the CDC were to base its recommendations on opinion, there is the potential that more and more children would not receive life-saving vaccines because groups of underinformed or misinformed non-experts who have no credibility to their arguments whatsoever were loud enough to lead to significant influence in the vaccination controversy.