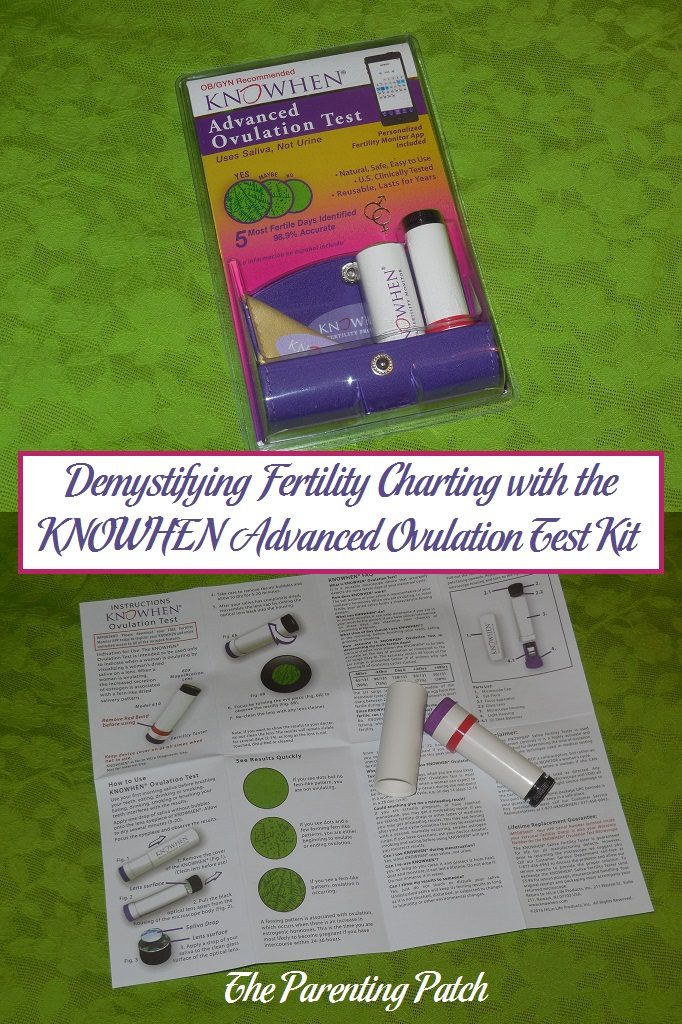 Over five years ago when my husband and I began trying to expand our family, I started reading Taking Charge of Your Fertility: The Definitive Guide to Natural Birth Control, Pregnancy Achievement, and Reproductive Health by Toni Weschler. As far as taking charge of my personal fertility, cervical mucus charting interested me the most. Because my menstrual cycles at the time were long and irregular (ranging on average from thirty-five days to forty-two days, I was never really sure when I might ovulate. I hoped that, by charting the changes in my cervical mucus, ovulation would become less elusive for me. I did learn to better read my body, but charting my cervical mucus took time and effort.

The book Taking Charge of Your Fertility promotes the Fertility Awareness Method (FAM). In addition to changes in cervical mucus, another of the three fertility signs of FAM is the basal body temperature. Although FAM is most frequently associated with natural family planning, basal body temperature charting is also useful for women like me who have irregular cycles but who want to pinpoint ovulation more accurately. In order to chart my normal temperature and my ovulation temperature, I needed to take my basal body temperature with a basal body temperature thermometer every day at the exact moment that I woke up. Before children, I could chart my BBT with some accuracy. I even used the method while attempting to conceive my son. Now with two kids, however, my sleep schedule is so whacky that charting my BBT would be almost impossible.

Back when I was trying to conceive my daughter, I also took the foray into the world of ovulation predictor kits (OPKs). After three cycles of charting and not getting pregnant, I finally gave in and bought an ovulation test. I gave in because, based on my temperature chart from my cycle starting in December 2010, I was having extremely long cycles but was not ovulating. I first bought a seven day ovulation predictor test kit and started testing on cycle day sixteen. I wound up discovering that I ovulated on day seventeen of the cycle. Because my cycles were so long and irregular, the next month I purchased a twenty day kit and began testing on cycle day six to ensure that I did not miss my luteinizing hormone surge. Using the OPK, I was able to pinpoint my ovulation day and miraculously conceived the little girl who is now my five-year-old daughter.

The downside of most OPKs is that the tests are not reusable, meaning, if I wanted to continue to use an ovulation test to track my cycles, I would literally be throwing money down the toilet in the form of a one-use pee stick. My husband and I are currently avoiding pregnancy but have not completely shelved the possibility of a third child. Thus, when offered the chance to test the KNOWHEN Advanced Ovulation Test Kit, I eagerly accepted the opportunity to try a reusable ovulation test that was easy to use. 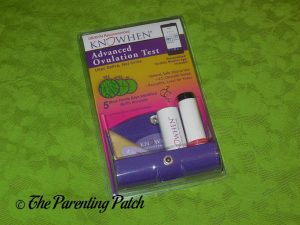 What is KNOWHEN? Unlike other ovulation tests that use urine to detect fertility, the KNOWHEN Advanced Ovulation Test Kit is a saliva-based daily monitoring method that measures estrogen rather than sudden and short-lived surges in luteinizing hormones. Also unlike traditional urine ovulation tests, KNOWHEN features a mini-ovulation microscope that can be re-used daily and indefinitely. KNOWHEN also comes with a free personal fertility monitoring app that allows a woman to track her ovulation, menstrual cycles, and sexual activity over time. 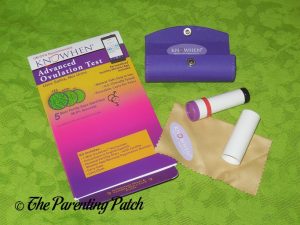 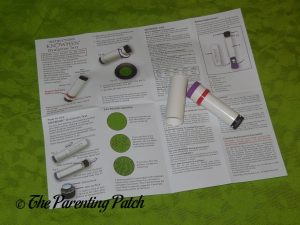 Using the KNOWHEN Advanced Ovulation Test Kit is super easy. First thing in the morning when you wake up, apply one drop of saliva without bubbles onto the lens eyepiece of the KNOWHEN microscope. Make sure to collect your saliva sample prior to brushing your teeth, eating, drinking, or smoking, all of which can interfere with the test results. You also want to take care to remove the air bubbles from the sample. After allowing your saliva to dry completely for five to twenty minutes, reassemble the lens cap and the focus the microscope by turning the eye piece. I found that the most difficult part of preparing the test was getting rid of all the bubbles, but, the more you use the test, the easier using it becomes. 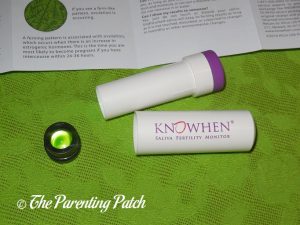 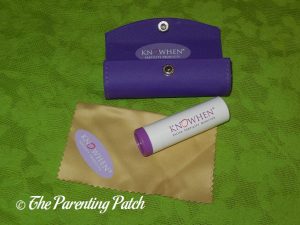 What I love about KNOWHEN Advanced Ovulation Test Kit is that you can see the results quickly. When I first ventured into the world of fertility charting, I read about saliva ferning. A ferning pattern is associated with ovulation, which occurs as a result of an increase in estrogenic hormones. On non-fertile days, dots appear in the dried saliva. As ovulation approaches, dots mingle with an emerging fern-like pattern. When ovulation is occurring, a fern-like pattern appears in the dried saliva. Clinical studies have also shown that KNOWHEN is 98% accurate on the day of ovulation.* You can then chart your results in the paper chart that comes with the ovulation test or use the KNOWHEN Fertility Monitor App.

Although my son is two years and two months old, my cycles are still a bit wacky because I am still breastfeeding. Tracking my basal body temperature is pretty much out of the question because of my interrupted sleep schedule due to bed-sharing and nighttime nursing. I could chart the charges in my cervical mucus, but sometimes I barely have time to shower let alone get any alone time in the bathroom. Traditional urine ovulation tests can become quite costly, especially for a woman with irregular cycles. The reusable KNOWHEN Advanced Ovulation Test Kit is therefore perfect for my needs. Not only can one test kit last indefinitely with proper care, but KNOWHEN is also quick and easy to use. I can place a drop of my saliva on the lens eyepiece when I first wake up and then let it dry while I put my contacts in and get ready for the morning. Plus, with my irregular cycles, KNOWHEN is easier and more accurate to use than other fertility charting methods.

For more information or to make a purchase, visit the KNOWHEN website.

*When the KNOWHEN Ovulation Test is used and interpreted correctly, it is a highly accurate and effective method for detecting the time of ovulation. It is similar to the techniques used in medical testing laboratories. The KNOWHEN Mini Ovulation Microscope is not a contraceptive, it is a medical instrument designed to monitor a woman’s menstrual cycle. KNOWHEN cannot guarantee a woman will become pregnant, but it will tell her when she is most likely to become pregnant and when she is not. The KNOWHEN Ovulation Test should only be used as directed.