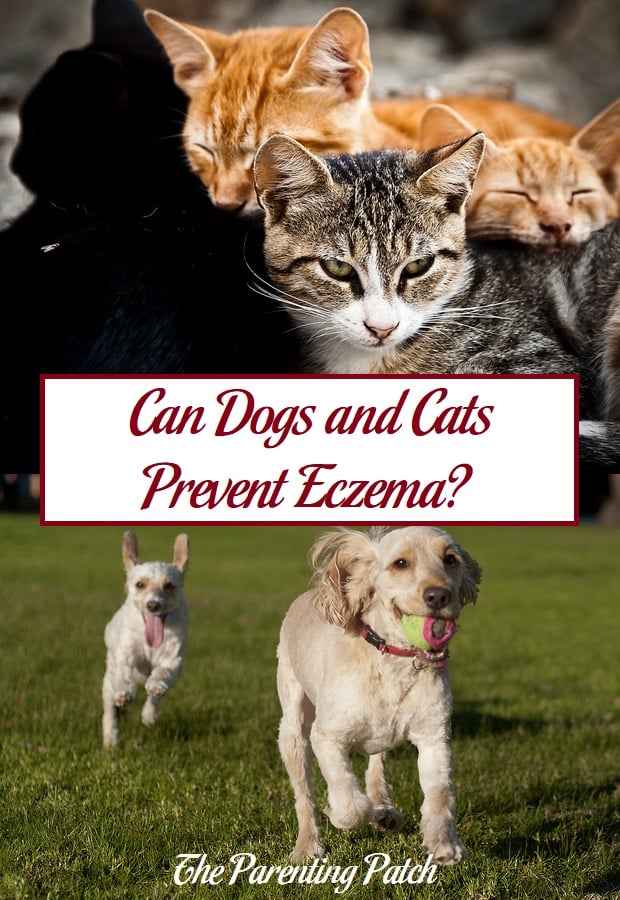 Because I have sensitive skin and allergies, I worried about eczema affecting my children long before I became pregnant with my oldest daughter. Both my brothers dealt with eczema and other skin problems growing up. I also had significant food allergies starting at age 7 and continuing through my first pregnancy. I am still allergic to a few foods, although I am happy to say that my immune system changed enough while pregnant that I outgrew most of my food allergies. I also have asthma. Based on family history, my children have an increased risk of asthma, allergies, eczema, and other autoimmune problems.

My youngest daughter, who is currently four months old, developed baby acne a few weeks after her birth. While researching treatment options for her pimples, I stumbled across a study that suggested that using petroleum jelly on an infant every day for the first six months of life could prevent eczema in high-risk newborns. Because of my own sensitive skin, I had already been diligent about applying moisturizer to my new baby. Eczema affects as many as 20% of children and costs the healthcare system in the United States as much as $3.8 billion dollars. Lead and corresponding study author Dr. Steve Xu, a resident physician in dermatology at Northwestern University Feinberg School of Medicine, also cites emerging work that suggests that preserving the skin barrier with something as simple as Vaseline may also reduce the risk of other related health problems like food allergies.

Applying petroleum jelly daily to my infant is easy, so I have begun putting Vaseline on my daughter every night as I get her ready for bed. Not only is her skin super soft; I may also have reduced her risk of developing eczema and other allergic conditions. Neither of my older children have thus-far developed eczema or other allergies including food allergies, but I continue to investigate ways in which I can further reduce the risk for my youngest. I have previously read studies that suggest that children who grow up with dogs in the household have a decreased risk of allergies and asthma. I thus wondered if living with dogs and cats could also reduce the risk of developing eczema.

To answer my question, I began with a Google Scholar search using the terms “dogs prevention allergies children.” According to a 2002 study published in the journal JAMA entitled “Exposure to Dogs and Cats in the First Year of Life and Risk of Allergic Sensitization at 6 to 7 Years of Age,” exposure to two or more dogs or cats during the first year of life may reduce the subsequent risk of allergic sensitization at 6 to 7 years of age. In other words, living with cats and dogs during infancy correlates to fewer allergies during childhood. Other similar studies have also come to the same conclusion about the benefits of dogs and cats on the development of allergies. When my oldest daughter was born, our household included a dog and a cat. By the time my son came along, we had two dogs and a cat. My youngest daughter was born into a home with three dogs and two cats. Neither of my two older children currently have any allergies. I like to think that growing up in a home with pets has benefited my children who are at an increased risk because of my allergies and asthma.

I then searched more specifically for “can dog exposure in infancy reduce the risk of eczema” to understand whether exposure to pets during infancy also decreased the risk for eczema during childhood. The results surprised me. According to a 2011 study published in The Journal of Pediatrics entitled “Opposing Effects of Cat and Dog Ownership and Allergic Sensitization on Eczema in an Atopic Birth Cohort,” dogs significantly reduced the risk for eczema at age 4 years among dog-sensitized children but cats combined with cat sensitization significantly increased the risk. The study followed 636 children at high risk for developing asthma, allergies, or eczema from birth until age 4. Children who were allergic to dogs were less likely to develop eczema when living with a dog during the first year of life. Conversely, children with dog allergies who did not live with dogs were four times more likely to develop the skin condition. Additionally, children who were allergic to cats were thirteen times more likely to develop eczema when living with a cat during the first year of life. Commented lead researcher and University of Cincinnati assistant professor of medicine Tolly Epstein, MD, on the findings, “If your child is high risk due to a family history of asthma, allergies, or eczema, this may be something to consider.”

However, I also found a 2017 study published in Current Pediatric Review entitled “Relevance of Cat and Dog Sensitization by Skin Prick Testing in Childhood Eczema and Asthma” that found no direct correlation between eczema and sensitization to cats or dogs. The study looked at 325 individuals with atopic eczema and did not find that having cats or dogs in the home correlated to the severity of the eczema. However, the authors did note that highly sensitized individuals, especially individuals also with asthma, may want to remove pets from the home for a trial period to determine if symptoms improve.

I additionally found a 2012 review published in the journal Clinical and Developmental Immunology entitled “Perinatal Cat and Dog Exposure and the Risk of Asthma and Allergy in the Urban Environment: A Systematic Review of Longitudinal Studies” that sought to systematically review the effect of pet ownership during infancy as a risk factor for childhood allergies. The authors found four articles that reported eczema as an outcome. Three of the articles suggested that exposure to dogs or pets at birth reduced the risk of eczema among infants and children. Two of the three articles used data from The Childhood Origins of Asthma Study (COAST) and found a reduced risk for eczema with exposure to dogs at birth but did not find an association with exposure to cats. The third article found a reduced risk with exposure to pets, especially among the high-risk group. The fourth article found a correlation between exposure to cats at birth and an increased risk of eczema during the first year of life but no similar relationship with dog exposure.

More recently, a 2017 study published in the journal Annals of Allergy, Asthma & Immunology entitled “Effect of Prenatal Dog Exposure on Eczema Development in Early and Late Childhood” looked at the relationship to prenatal exposure to dogs and the subsequent development of eczema during childhood. The study examined mother-child pairs exposed to a dog, which the researchers defined as keeping one or more dogs indoors for at least one hour daily. Explains allergist and study co-author Edward M. Zoratti, MD, “We found a mother’s exposure to dogs before the birth of a child is significantly associated with lower risk of eczema by age 2 years, but this protective effect goes down at age 10.” In other words, prenatal exposure to dogs decreases the risk of developing eczema.

Finally, research presented at the 2006 American Thoracic Society International Conference suggested that children exposed to cats soon after birth may have an increased risk of developing eczema. The effect was more pronounced in children whose mothers did not have asthma. The study also found that having two or more dogs at home was associated with slightly lower rates of eczema. Researchers noted that the results contradicted previous studies that suggested having cats or dogs in the home may protect against allergic diseases including eczema.

While quite a few studies have looked at the relationship between having dogs and cats in the home during infancy and the risk of eczema, the findings are neither clear nor consistent. The majority of research concludes that exposure to pets has no negative effect on the subsequent development of the irritating skin condition during childhood. Many suggested that dog ownership could offer some protection against the development of eczema, especially children considered high risk for allergic diseases. However, a handful also suggested that exposure to cats could increase the risk. None of the studies determine causation between animal exposure and either increased or decreased risk of childhood eczema. So what is a parent to do?

In my opinion after looking at the evidence, the other benefits of having dogs or cats in the home during infancy outweigh any possible risks for eczema. While the evidence on the protective benefits of pet ownership against the skin condition is contradictory and inconclusive, other research has found clearer benefits in regards to asthma, allergies, and infections. Anecdotally, I grew up in an overly clean environment without indoor pets. I have allergies and asthma. My children who are growing up in a pet-friendly environment currently have no allergies or signs of asthma. Therefore, families who want an indoor cat or dog but are worried about the risk of eczema should not be overly concerned. Fluffy may offer some protection against developing eczema during childhood — or not — but the majority of research concludes that exposure to pets has no negative effect on subsequent eczema. But, if you are worried, then adding a dog to your household appears to be a slightly better choice than a cat.

Cost-effectiveness of Prophylactic Moisturization for Atopic Dermatitis: https://jamanetwork.com/journals/jamapediatrics/fullarticle/2588412
Dogs May Protect Against Childhood Eczema and Asthma: https://acaai.org/news/dogs-may-protect-against-childhood-eczema-and-asthma
Early Cat Exposure Can Increase Some Children’s Eczema Risk: https://www.sciencedaily.com/releases/2006/05/060522115338.htm
Effect of Prenatal Dog Exposure on Eczema Development in Early and Late Childhood: http://www.annallergy.org/article/S1081-1206(17)30698-1/fulltext
Exposure to Dogs and Cats in the First Year of Life and Risk of Allergic Sensitization at 6 to 7 Years of Age: https://jamanetwork.com/journals/jama/fullarticle/195228
Opposing Effects of Cat and Dog Ownership and Allergic Sensitization on Eczema in an Atopic Birth Cohort: https://www.ncbi.nlm.nih.gov/pubmed/20884006
Perinatal Cat and Dog Exposure and the Risk of Asthma and Allergy in the Urban Environment: A Systematic Review of Longitudinal Studies: https://www.ncbi.nlm.nih.gov/pmc/articles/PMC3251799/
Protecting babies from eczema with low-cost Vaseline: https://news.northwestern.edu/stories/2016/12/baby-eczema-vaseline/
Relevance of Cat and Dog Sensitization by Skin Prick Testing in Childhood Eczema and Asthma: https://www.ncbi.nlm.nih.gov/pubmed/28641549
The Role of Furry Pets in Eczema: A Systematic Review: https://jamanetwork.com/journals/jamadermatology/article-abstract/654467?redirect=true
Study: Dogs Protect Kids at Risk for Eczema: https://www.webmd.com/skin-problems-and-treatments/eczema/news/20100930/study-dogs-protect-kids-at-risk-for-eczema#1