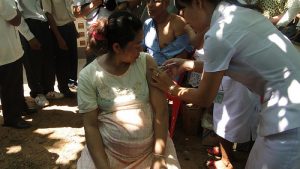 Pregnant women can and should receive the influenza and Tdap vaccines to protect both mother and baby from the respiratory flu and whooping cough. A new six-year study published in the journal Obstetrics and Gynecology confirms the safety of both vaccines during pregnancy and reveals that pregnancy women can receive both at the same time instead of spacing out the shots as previously recommended.

Influenza, or the flu, is a contagious respiratory illness caused by various flu viruses. Symptoms of the flu include fever, chills, cough, sore throat, runny or stuffy nose, muscle or body aches, headaches, and fatigue. Pregnant women have an increased risk of complications from the flu. The seasonal flu shot provides protection against influenza. Infants are also at an increased risk for complications from the flu, but vaccination during pregnancy provides some protection against the contagious disease among newborns.

The Tdap booster prevents tetanus (T), diphtheria (d), and pertussis (ap). Pertussis, or whooping cough, is a highly contagious respiratory tract infection that can cause babies to stop breathing. Many babies who get whooping cough are infected by parents, older siblings, or other caregivers. Pregnant women should receive the Tdap booster during the third trimester because mothers pass on some protective antibodies to their children before birth. The antibodies then help protect newborns until reaching two months old, at which time infants can receive the DTap vaccine.

For the present study, researchers analyzed data on 36,844 women between the ages of 14 and 49 who flu and whooping cough vaccines during pregnancy between 2007 and 2013. The vaccines were administered at the same time in 23% of the pregnancies and at separate times in the other 77%.

The study found no significant increased risk of fever or other adverse effects to mother or baby. States vaccine research scientist and study co-author Marlene Lugg, “There was no difference in early birth, low birth weight, in any of the babies’ outcomes.”

Additionally, the study addressed receiving both vaccines at the same time, a question that previous research had not investigated. Explains Dr. Richard Beigi, Chief Medical Officer and Vice President of Medical Affairs at Magee-Womens Hospital at the University of Pittsburgh Medical Center and spokesperson for the American Congress of Obstetricians and Gynecologists:

“This study is reassuring in that it involved thousands of women at multiple centers. It validates what we’ve already known for years but it’s really nice to see this. It provides reassurance that when you give them together it’s very safe. There’s no signal in study that would be of concern for an OB care provider.”

The present study did not delve into the impact of the flu or whooping cough vaccines on the unborn baby after birth. Previous studies, however, have suggested that vaccination during pregnancy protects the baby as well as the mother. Says Beigi, “Numerous studies show immunizing the mother protects the baby.”

“Administration of the Tdap vaccine stimulates the mother’s immune system to make antibodies, and these antibodies cross the placenta and get into the fetal bloodstream. Then, when the baby is born, these antibodies help protect the newborn from any exposures to individuals that may have pertussis.”

The study confirms that both Tdap and flu vaccines pose little risk for pregnant women and unborn babies.