Pruning shears (which are also referred to as hedge pruning shears, hand shears, garden shears, secateurs, and loppers) are a useful gardening tool primarily used for pruning or cutting back bushes and shrubs and for trimming smaller branches from trees. Shears are also useful for cutting flowers and fruits from plants. Unlike other blades or saws, pruning shears can cut in a single, clean motion. Although all shears resemble large scissors with their short handles and set of blades, the two most popular types of pruning shears are bypass shears and anvil shears. Bypass shears have two blades that cut identically to scissors. Anvil shears, which function more like a knife on a cutting board, have one blade that closes onto an opposing flat surface. Some pruning shears also have a spring between the handles that forces the blades back open after each cut. Loppers generally have longer handles than other types of shears. 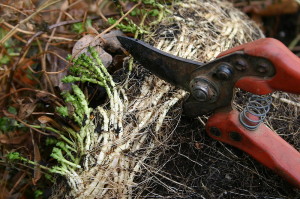 To use pruning shears, slip the branch to be cut between the blades of the shears and use the handles to squeeze the blades shut. This cutting motion will slice the blades into the branch and remove the branch from the plant. Always use shears that are an appropriate size for the branch you wish to cut. For example, half-inch shears should be used to cut only branches that measure one half-inch in diameter or less; using too small shears on a larger branch can snap the blades off the gardening tool. (Just ask this gardener who managed to break her pruning shears!)

The best way to use pruning shears to prune a bush or shrub is to begin by removing any dead wood or diseased branches from the plant. Always cut at the base of a branch rather than in the middle or near the end. Next remove any unwanted growths including overly tall branches, new shoots growing from the ground, and any branches sticking out from the main section of the plant. Finally, if your bush is of the blooming variety, remove any dead flowers by snipping the bloom off at the base. To clean and sanitize your shears, simply scrape off the plant debris with a rag or steel brush and then wipe down that blades with one part bleach to one part water. Always store your pruning shears in a dry place when not in use to prevent rust and other damage.

When buying pruning shears, one of the most important things to consider is the type of shears; anvil shears tend to be cheaper than bypass shears. The reason for this price difference is that bypass shears result in cleaner cuts than anvil shears. Therefore, you should consider what you will be using your shears for in order to best determine the type you need. For example, if you just want to prune some large bushes or small trees, anvil shears can be the right tool for the job. If, however, you plan to prune smaller or more delicate plants like rose bushes, then you may want to consider a pair of bypass shears. 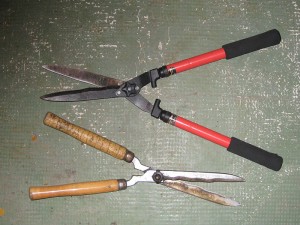 After you have determined the type of pruning shears you need, the second most important thing to take into account when buying shears is the sturdiness and durability of the tool. Cheap shears can and do break easily. You should therefore select pruning shears that have strong carbon-steel or composite blades. Depending on how much work you plan to do, you may also want to consider a pair of shears with covered handles. If you choose shears with a spring mechanism, make sure the locking mechanism will remain place when closed but that is also fairly easy to open. Garden tools that come with manufacturer warranties tend to be of better quality than less expensive off-brands. Like other gardening tools, pruning shears can be purchased at most garden stores, both large and small.

Pruning shears or pruning shears are gardening tools that are useful for cutting back bushes and shrubs as well as for trimming smaller branches from trees. Available at most gardening stores, hand shears are an easy-to-use must-have garden tool for any gardener.