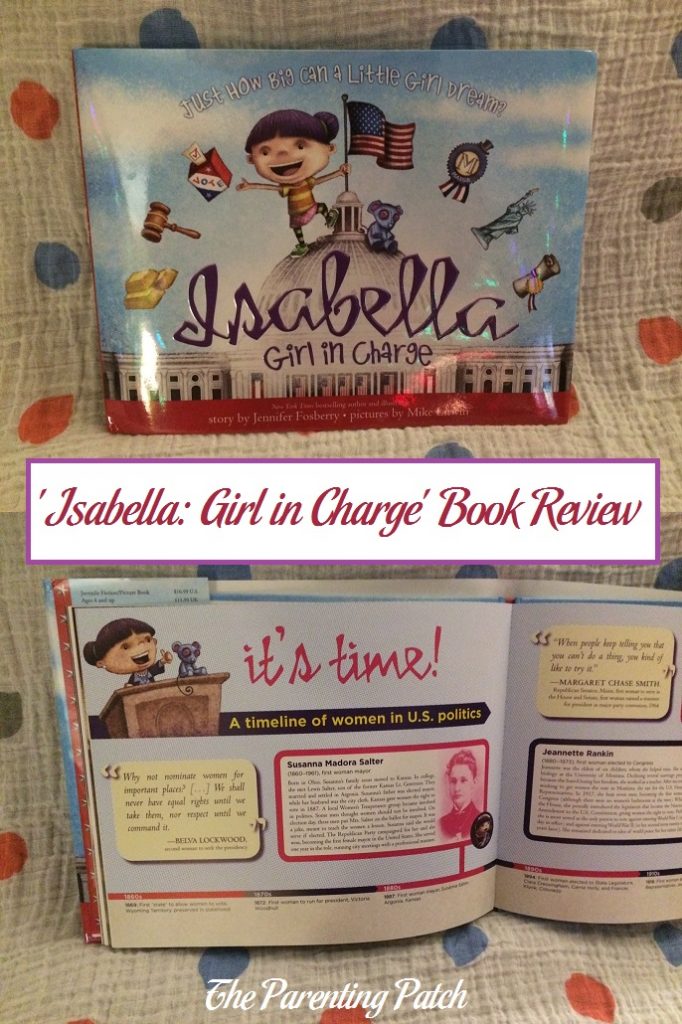 I want my daughter to know that she can do anything that boys can. I am also teaching my son that boys and girls are not limited in their attempts and achievements based on their sex or gender. During the past election cycle, my daughter and I talked a lot about the possibility of the first girl president. I also frequently look for books to read with my kids that empower girls and women. When recently offered the chance to review Isabella: Girl in Charge written by Jennifer Fosberry with illustrations by Mike Litwin in exchange for my honest opinion, I eagerly accepted the opportunity to add a new title to my home library. The 32-page hardback boo currently costs $12.89 on Amazon with a list price of $16.99.

A New York Times bestselling author, Jennifer Fosberry is a science geek who became a writer of children’s books. After running away to Costa Rica for a few years, she returned to the San Francisco Bay area with her husband and three children to read, write, and try to get out of doing housework. She is also the author of My Name Is Not Isabella, Isabella: Girl on the Go, Isabella: Star of the Story and My Name Is Not Alexander.

A New York Times bestselling illustrator, Mike Litwin combines oil glazing, color pencil, collage, and other mixed media to create scenes that serve the imagination and education of children. In other words, he is a big kid who draws pictures for a living. He currently resides in Greenville, North Carolina with his wife and three daughters.

Recommended for readers between the ages of 4 and 8, Isabella: Girl in Charge features the plucky, purple-haired Isabella, star of the New York Times bestselling picture book series, in a new adventure. Isabella is up at the crack of dawn and ready to start her day, but her parents insist that it is not time to leave. Impatient, the little girl attempts to command her mom and dad to leave early by imagining herself as various female leaders. Some of the women that Isabella pretends to be include Sandra Day O’Connor, Frances Perkins, Jeannette Rankin, Nellie Tayloe Ross, and Susanna Madora Salter. The end of the book includes an extended biograph for each woman and a timeline of women in American politics. 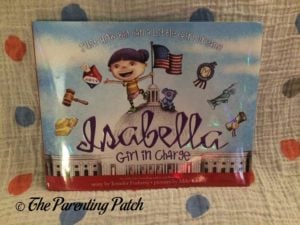 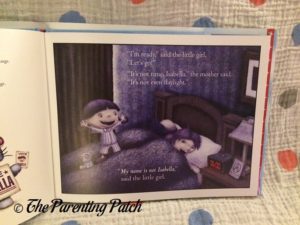 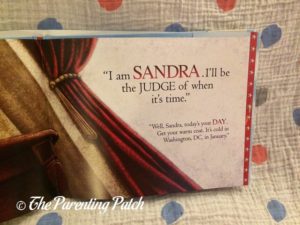 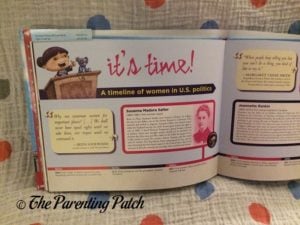 “Just how big can a little girl dream?” asks Isabella: Girl in Charge. If you are a spunky little girl like Isabella, the answer is huge. I love that this book exposes young readers to important women in American politics through a fun and relatable story. As the synopsis reads, “Taking inspiration from the women who trail blazed their way onto the political map of America, Isabella celebrates the women who were first to hold their offices.” The book is a perfect introduction to women in politics. I also love the longer biographies at the end. Plus the book is a perfect starting point for researching more information about all the women mentioned in the story.

My almost five-year-old kindergartener has been reading on her own for over six months now. Isabella: Girl in Charge is recommended for readers in preschool through fourth grade, and my daughter can read most of the text on her own with only a little bit of help (mostly with the names). I therefore agree with the recommended age range. I also like the various fonts, font sizes, and typographical emphasis used throughout the text, which help make reading the book even more interesting.

In addition to the important message in the text, I really enjoy the illustrations in Isabella: Girl in Charge. First, I love that the spunky little Isabella has purple hair. She is a girl after my own heart! (I also love that her mom also has similar purple hair.) I also really like the illustration style, which is soft but still full of bold colors. Both my kindergartener and toddler also enjoy looking at the pictures. My daughter especially likes the cover because she is obsessed with climbing on poles in exactly the same way as Isabella!

If you are searching for a living book about women in politics, I highly recommend Isabella: Girl in Charge written by Jennifer Fosberry with illustrations by Mike Litwin. The story follows the plucky, purple-haired Isabella attempts to command her mom and dad to leave early for an important event by imagining herself as various female leaders. Recommended for readers between the ages of 4 and 8, the book is a great introduction women who trail blazed their way onto the political map of America. As a homeschooling mom, I plan to use Isabella: Girl in Charge in current and future social studies lessons and definitely recommend the book to other little girls (and boys)!

Purchase Isabella: Girl in Charge on Amazon via my affiliate link.