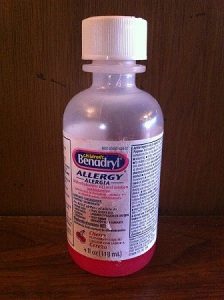 As I have previously written, I suffer from moderate to severe allergies including allergies that manifest as nasal allergy symptoms. My preferred allergy medication is Flonase. However, because Flonase is a category C drug, I have opted to refrain from using the medication before and during pregnancy. Despite trying other treatment options, only Benadryl (diphenhydramine) offers me any relief from my allergies.

According to the 2012 edition of Medications and Mother’s Milk, diphenhydramine is a category B drug during pregnancy:

In other words, Benadryl is considered a safer option during pregnancy. More specifically, animal studies conducted on pregnant rabbits indicate that large doses of Benadryl do not increase the risk of problems in offspring. However, the number of adequate, well-controlled human studies on the drug during pregnancy are lacking.

Upon doing some research on Benadryl during pregnancy, I discovered that, although most studies indicate that the drug is fairly safe to use during pregnancy, limited evidence that suggests that Benadryl increases the risk of cleft palate. However, the evidence is currently inconclusive. Additional studies still need to be conducted on the potential association between Benadryl during pregnancy and an increased risk of cleft palate. I additionally read that the use of antihistamine drugs during the last two weeks of pregnancy may increase the risk of a certain eye problem that cause blindness (retrolental fibroplasia). Again, however, the evidence is insufficient to indicate causation.

Upon further investigation of the association between the use of antihistamines during pregnancy and blindness, I discovered a few potential problems with the study that found the link. First, the study from 1986 evaluated only 3,026 women with premature infants. Thus, the conclusion may not apply to full term babies. Additionally, the researchers did not specify the type or dosage of antihistamine evaluated. Despite that the study found that the incidence of retrolental fibroplasia in premature infants exposed to antihistamines during the last two weeks of pregnancy was 21% compared to 11% in premature infants not exposed, the fairly significant problems with the study means that the results are not widely applicable. I would be interested to see an updated study on the potential link, a study that looks at babies born at all gestational ages and that specifies the type and dosages of antihistamine.

The few other human studies that I found on the use of Benadryl during pregnancy also indicate a serious need for further research. For example, the article “Use of Over-the-Counter Medications During Pregnancy” as published in the 2004 issue of the American Journal of Obstetrics & Gynecology, which included diphenhydramine in the study, concludes:

An even older review from 1978, “Safety of Therapy for Allergic Symptoms During Pregnancy,” as published in the Annals of Internal Medicine, also concluded that the commonly used antihistamine drugs appear to be safe during pregnancy. Additionally, the study indicates possible hope for my use of Flonase during pregnancy. Flonase is a steroidal drug, but the study found that side effects are reduced when steroids are administered as aerosols in the nose or lung and therefore seem well suited for use in pregnancy. However, the review is over thirty years old and does not take into account newer studies.

To treat my nasal allergy symptoms, I have been taking 25 milligrams of diphenhydramine almost every night for the past three months of my pregnancy with the approval of my midwife. Based on the evidence, Benadryl during pregnancy appears safer. I have also weighed the risks and benefits of using the medications against leaving my allergies untreated. The biggest risk of not taking the drug is that I cannot breath well and therefore do not sleep well because of my allergy symptoms. Exhaustion during pregnancy also poses a significant risk to mother and baby. Thus, I have opted to take a low dose of Benadryl once a day to alleviate my allergy symptoms enough to sleep.

However, with the potential association between the use of antihistamines during the last two week of pregnancy and an increased risk of blindness, I also plan to stop or limit my nightly use of Benadryl as I enter the second half of the third trimester. With my daughter, I was able to stop taking as much of the medication as the cooler weather of fall appeared. Once all the plants die or hibernate, my allergy symptoms ease up considerably. However, even if this fall does not bring me the same relief, I still plan on reducing or eliminating my use of Benadryl during the last part of my pregnancy — just in case. For me, I can suffer through a few weeks of sleepless nights due to my nasal allergy symptoms. As my belly gets bigger, I will not be sleeping as well anyway! And I would rather risk some extra fatigue during late pregnancy than potential blindness for my second child — at least until additional studies confirm or disprove the earlier association.

Did you take Benadryl during pregnancy?

Disclaimer: The information provided in this article is not meant to replace the professional medical advice from a health care professional.