I love simple toys. I also love toys that grow with a child. I recently partnered with The School Shop to review educational toys and games available at the store. Christy Komnick, one of the owners of The School Shop, offered me the opportunity to review a KEVA Contraptions 50 Plank Set a few weeks ago. Having seen the simple butinnovative building toy in a number of children’s museums, I eagerly accepted the offer. I received one KEVA Contraptions 50 Plank Set to test and review with my preschooler daughter and infant son. 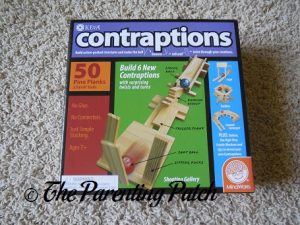 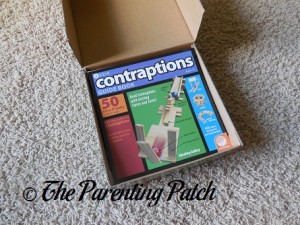 Young thinkers can design unbelievable ball track structures via the simple stacking planks that require no glue or connectors of KEVA Contraptions. The 50 Plank Set helps kids start constructing with two balls and an instruction book detailing how to build a “Shooting Gallery,” “Turbine,” “Step Curve,” and more. KEVA Contraptions have been awarded the Major Fun Award and the Parenting for High Potential Recommended Award.

MindWare is the exclusive manufacturer and distributer of KEVA products. The company is a creator, manufacturer, and distributor of Brainy Toys for people of all ages. The diverse product line includes games, puzzles, brainteasers, arts and crafts activities, mysteries, mazes, and more including KEVA Contraptions. Founder Jeanne Voigt started MindWare in 1990 with a small retail store in the Uptown area of Minneapolis. Over the years, the company has been dedicated to providing children with high quality educational products. 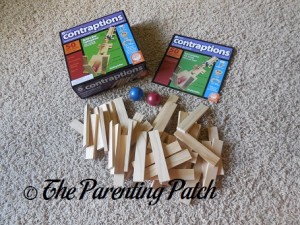 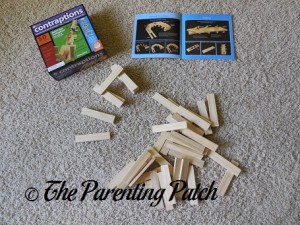 Although recommended for children ages 7 and older, the KEVA Contraptions 50 Plank Set and other KEVA planks appeal to kids of all ages from preschoolers to adults. Because of the small balls that pose a choking hazard, children under 3 years old should not play with the toy unsupervised. My preschooler daughter already loves playing with the wooden planks. She thinks the toy is fun, and, when I inquired her thoughts, she said that the KEVA Contraptions 50 Plank Set was her “favoritest.” My infant son also likes picking up the wooden planks and banging two together. I also enjoy constructing structures with my daughter. Thus, although recommended for children 7 years old and up, I think that KEVA planks appeal to a huge range of ages, making the toy extremely versatile and long lasting.

KEVA planks are a fairly unique building toy. By having every piece exactly the same, builders do not spend any time searching for a particular connector, maintaining an inventory of parts, or struggling to have enough of the correct pieces. The building and fun starts immediately with the KEVA Contraptions 50 Plank Set. Simply dump the planks out of the box and let the innovation grow! My daughter loves building all sorts of designs and structures with her KEVA planks. She builds houses, roads, towers, and so much more with the simple wooden toy. Her only limitation is her imagination! 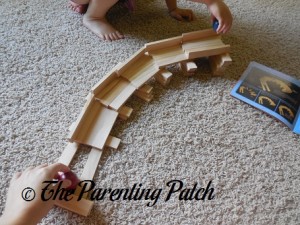 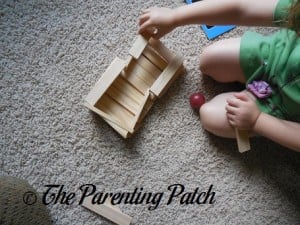 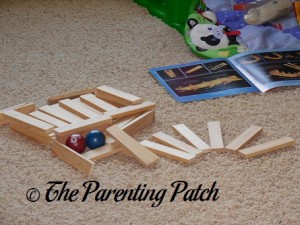 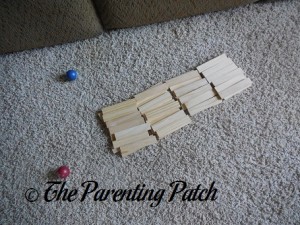 My husband also enjoys building creations with the KEVA Contraptions 50 Plank Set with our daughter. He likes that he can start with one of the ideas in the guide book and then use his imagination to expand the creation into something more. He even described the toy as “challenging,” meaning adults can have just as much fun constructing with the wooden planks as children.

KEVA produces two types of planks: pine and maple. All sets not labeled as KEVA Maple are made from pine. Pine planks are the same dimensions as maple and create the same structures.  Pine KEVA planks are imported like the majority of toys in the USA. Pine KEVA planks are more affordable compared to the maple planks. All maple planks are made from top grade rock maple in the Maine. Maple KEVA are the standard for museums and schools because the planks are tough enough to withstand the heavy use while pine KEVA works well for home use. I received the pine planks. Despite an infant who sometimes attempts to gnaw on the wood and a preschooler who is a bit rough with her toys at times, my pine planks still look brand new. I rate the quality of the wood in the KEVA Contraptions 50 Plank Set extremely highly. I am sure that my kids will enjoy this simple wooden toy for years to come. 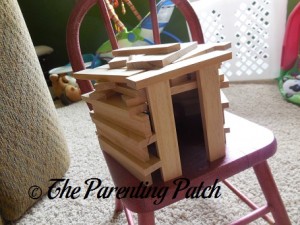 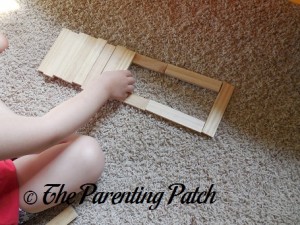 I can come up with one two negatives for the KEVA Contraptions 50 Plank Set. First, my daughter already wants even more planks so that she can build bigger and bigger creations. KEVA planks are simple but addicting, so I can definitely see myself buying more sets so that my kids can build and innovate together for years to come. Second, the balls are not made for small children. The small size poses a choking hazard for my infant son. And my daughter keeps trying to squeeze the thin plastic, which dents the balls. I can let her to play with the planks on her own but not the balls. Otherwise, I cannot find any significant negatives for the KEVA Contraptions 50 Plank Set.

If you are a fan of simple wooden toys, I recommend checking out the KEVA Contraptions 50 Plank Set from MindWare. At only $19.95, the set of 50 KEVA planks and two KEVA balls is comparably and reasonably priced. Although recommended for children ages 7 and older, the wood construction set appeals to younger children through adults and all ages in between. The quality of the wooden planks is high, and I cannot find any significant faults with this building toy. I highly recommend the KEVA Contraptions 50 Plank Set to children of all ages who enjoying building, creating, and innovating! 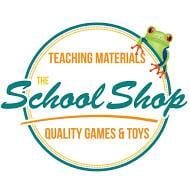 The School Shop carries a full line of classroom decoratives, teacher materials, supplies, and resources as well as educational toys, games, puzzles, and crafts. For more information, visit The School Shop website or follow The School Shop on Facebook.