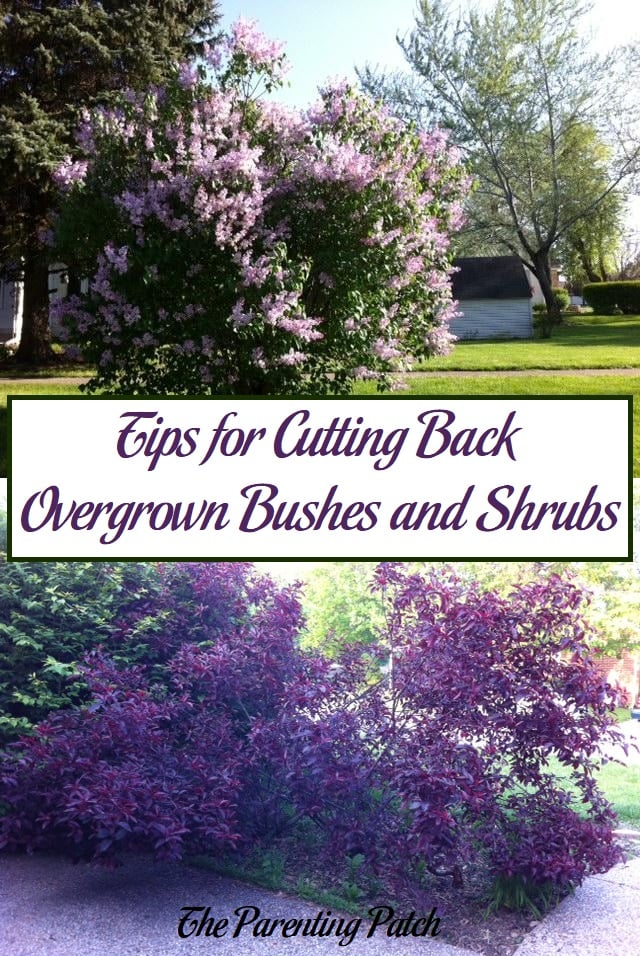 Bushes and shrubs are woody plants that are distinguished from trees and other plants by their multiple stems and shorter full-grown height. Bushes are also perennial, which refers to any plant that lives for more than two years. The terms bush and shrub refer to many types of plants including butterfly bushes, burning bushes, evergreen shrubs, flowering shrubs, landscaping shrubs, and lilac bushes. Because they are perennial, bushes and shrubs can grow to heights of fifteen to twenty feet tall depending on the particular variety of plant. Thus, bushes and shrubs that have become overgrown can become a problem. Cutting back overgrown bushes and shrubs is therefore essential for maintaining the good health of the plant.

When to Cut Back Overgrown Bushes Many gardeners cut back bushes and shrubs to maintain the good health and attractive appearance of the plant. Shrubs and bushes that are left unpruned for too long of a period can become overgrown. Depending on the variety such as lilacs, an overgrowth will result in the bush or shrub producing fewer blooms and flowers. Because overgrown plants are also at an increased risk for disease and pest infestations, overgrown bushes and shrubs should be cut back as a way to renew or rejuvenate the plant. Pruning is also a good method for training a plant to grow in a certain direction or shape. Trees also need pruning too and, while you may feel comfortable pruning bushes and shrubs, you may wish to call in Professional arborists Orange County, or a service more local to you, for any tree servicing you may need.

Although bushes and shrubs can be cut back at almost any time during the year, there are better and worse times recommended for pruning. The best time to prune most bushes and shrubs is in late winter or early spring-usually during the later half of March or the beginning of April-before new growths have formed after the dormant period. Avoid cutting off new shoots, buds, and blooms. Although not ideal, the second best time to prune an overgrown bush or shrub is at the end of the summer after the plant has finished growing for the year. Pruning in the late spring or early summer is not recommended because cutting off new growths can cause damage to the plant.

How to Cut Back Overgrown Bushes

Bushes and shrubs should ideally be pruned every year. However, gardeners should take a three year approach to cutting back overgrown bushes and shrubs before pruning the entire plant annually. During the first year, remove one-third of the biggest and older branches starting at the bottom of the plant. Use a good pair of sharp gardening shears or clippers. Always cut a branch at the base rather than in the middle or near the end. During the second year, remove one-half of the oldest remaining branches as well as some of the new shoots. During the third and subsequent years, trim and shape the bush or shrub as desired. If you wish to forego the three year plan, some bushes like lilacs can be entirely trimmed to about one to three inches from the ground.

After initially cutting back an overgrown shrub or bush, continue to prune the plant annually to maintain it. Begin by removing large stems from the center and bottom of the bush. Then remove any old blooms or flowers that have died as well as any unwanted growths including overly tall branches, new shoots growing from the ground, and any branches sticking out from the main section of the plant. If you wish to shape your bush or shrub in a certain fashion, use gardening twine or a similar material for gently force branches to grow in a certain direction. Remember: the easiest way to maintain a healthy and attractive bush or shrub is to prune yearly in the early spring.